2008 was not a kind year to the Steel Curtain. In January, Ernie Holmes died in a car accident, and then Myron Cope passed away, silencing Steelers Nation’s definitive voice. Sadly, in June of 2008 Dwight White joined them.

In his 2002 autobiography, Double Yoi, Myron Cope dedicated an entire chapter, “Half of the Steel Curtain,” to Holmes and White. He argued that while Joe Greene and L.C. Greenwood received their just accolades, Holmes and White were too often overlooked. Whether it be because of Divine will or a random act, all three were called away from Steelers Nation in a span of less than six months.

Growing up in 70’s suburban Maryland in a household where sports held a low priority, I knew very little of Dwight White and Ernie Holmes. 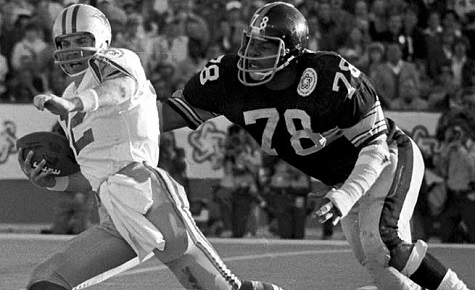 I of course knew about “Mean Joe Greene.” While the Steelers were busy winning their third and fourth Super Bowls, some of the other kids on Wendy Lane and I used to play “Super Steelers” pretending that the Steelers had super powers. If memory serves, Joe Greene could turn himself into a giant at will. (Lynn Swann had super speed. Franco could bust through walls. Terry Bradshaw threw exploding footballs and could hit anything he aimed for. Although I was yet to be acquainted with The X-Men at age six, Chuck Noll played a professor Xavier-like role.)

While L.C. Greenwood held no place in our Parthenon of Steelers Super Heroes, I distinctly remember a friend preparing to go into his Five Mississippi rush in a game of Nerf football saying, “I’m L.C., I’m L.C.” and knowing immediately he was talking about L.C. Greenwood of the Steelers.

Like Ernie Holmes, “D. White” was just a name and a face that I knew from Steelers 50 Seasons poster that hung on my wall for so many years. I didn’t learn just how distinguished a member of the Steel Curtain that Dwight White was until I was in college.

His comments on the NFL Flims tribute to Chuck Noll that appeared on the back end of the Steelers 1992 season in review are priceless.

Ray Mansfield sets the stage, recounting how John Madden capped the Raiders victory over the Miami Dolphins by proclaiming “the best two teams in football played to day, and it’s a shame that one of them had to lose….” Continuing, Mansfield explains that Noll came in the locker room the next day, with a determined look on his face, saying “They think the just won the God Damm Super Bowl… But let me tell you something, the best God-Dammed football team is sitting right here.”

White picks up the thread, remembering “At the time, that was pretty strong language for Chuck. Later on he developed the ability to rattle it off pretty well, but at the time that was pretty uncharacteristic.” White recounts how Noll’s words set the locker room on fire, reassuring that, “From that point on, we knew we were going to win…. I mean, it was like getting a blessing to go out and beat up on somebody.”

The Steelers of course went on to upset the Oakland Raiders 24-13 in the AFC Championship, but the game that followed was perhaps White’s finest hour. As Myron Cope tells the story, White was stricken with phenomena the week of the Super Bowl IX. He’d lost 18 pounds and was so sick he was unable to lift his leg on the one day he tried to practice.

On the morning of Super Bowl Sunday, White left the hospital, insisting that he be taken to the Sugar Bowl. Team Dr.’s let him warm up, figuring he would pass out. White didn’t, and insisted on starting the game.

The Vikings tested White immediately. They ran directly at White on their first three runs, and White stopped them each time, tackling Dave Osborn for a loss, no gain, and a one yard gain. Topping it all off, White scored the game’s first points, sacking Fran Tarkenton for a safety. White played the entire game, save for a few plays in the first quarter. Minnesota finished the day with 21 yards rushing on 17 attempts.

When asked about it years later by Cope, White told him’’ “‘You know what? It was kind of a blur’” He also offered “‘What I remember, though, was that our players kept asking me in the huddle, “How you feeling?” It was annoying’”

White followed up this effort by sacking Roger Starbauch three times in Super Bowl X, and registered 33.5 sacks between 1972 and 1975. Dwight White retired in 1980, and 27 years later he is still 7th on their all-time sack list.

Like many of the Super Steelers, Dwight White settled in Pittsburgh, excelling at what Chuck Noll calls “life’s work.” He worked as a stock broker, ultimately becoming the Senior Managing Director in Public Finance for Mesirow Financial. White was also active in numerous Pittsburgh charities.

Ray Mansfield was the first Super Steeler to pass away, followed by Steve Furness, Mike Webster, and Ernie Holmes. As haunting as that is, the numbers paint an even grimmer picture: According to ESPN, 38 former Steelers have died since 2000, and 17 of those were 59 or younger.

But nothing is quite is poignant as the realization that, with Dwight White’s passing, the Steel Curtain now permanently stands at half strength.