In recent years the outcome of Steelers vs. the Patriots has carried a certain magnitude felt into the post-season.

Interestingly enough, while the Patriots are not historic rivals, Steelers vs Patriots history is littered with milestones or turning points for Pittsburgh or, at the very least, they revealed something important about the Steelers.

Click below or scroll down for a look back at some of the past match ups with the Patriots and what they’ve meant: 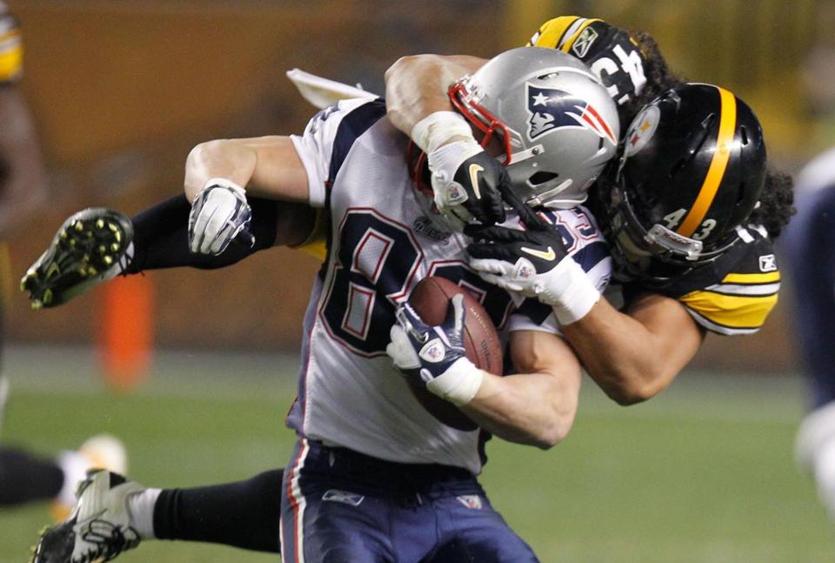 Everyone knows that the 1989 Steelers lost their first two games by a combined score of 92-10, yet made the playoffs. At 4-6, Chuck Noll refused to write off the year as a rebuilding season, and declared that the Seelers were aiming for the playoffs. Everyone rolled their eyes.

The Steelers won five of their last six games. In the fifteenth game of the season, the Steelers upset the Patriots 28-10.

The Steelers followed the glory of 1989 with a season filled frustration for their fans. When a reporter asked Noll why the Steelers had failed to defeat a winning team in 1990, he responded: “We did beat a winning team, we beat ourselves a number of times.”

One of the losing teams that the Steelers dispatched that year was the Patroits, winning 24-3 on December 9th.

In perhaps the most ho-hum match up of them all, the Steelers defeated the Patriots 20-6 in the 1991 season’s third contest.

After devastating the defending AFC Champion Buffalo Bills 23-0 on Monday Night Football, the Steelers got manhandled in successive weeks by the Broncos and then the Oilers. Late in the season, New England begins to respond to Bill Parcells and starts winning games. The Steelers prevail 17-14.

The Steelers defeat the Patriots 41-27 in a wild game that sees Curtis Martin become one of the few runners to rush for 100 yards against the Steelers.

Although visiting Foxboro for the first time since 1979, the Steelers enter the divisional playoff game as favorites. But Jerome Bettis plays hurt. Kordell Stewart fails to complete a single pass in relief of Mike Tomzack. A thick fog envelops the playing field, and this aptly describes the Steelers performance.

The 1997 versions of the Steelers and Patriots were about as evenly matched as you’ll ever see two NFL teams. The game features Bill Cowher going for it on fourth deep in his own territory early in the game. Despite converting this gamble, the Steelers never lead in regulation. Leading 21-13 late in the game, New England only needs to covert one more third down to run out the clock.

Dropping back into coverage on third down, defensive end Kevin Henry intercepts Bledsoe’s pass and returns it far down field. In the ensuing position Yancy Thigpen makes an acrobatic 4th down conversion, to set up a Steelers touchdown followed by a 2 point conversion that ties the game. Steelers win in overtime.

The 1997 Steelers and 1997 Patriots would meet again in the playoffs.

Kordell Stewart scored the games’ only touchdown and team’s only points on a planned run in the first half. But the story is defense and field position, as Bill Cowher and Pete Carroll match wits throughout the contest. Late in the game, Cowher goes for it on fourth and goal and the Steelers are stuffed, but the defense holds for a 6-7 win.

One week after the infamous “heads-tails” fiasco in Detroit the Steelers offense is beyond deflated, and the team loses 23-9.

2001 AFC Championship – Yes, Special Team IS Part of the Game Too…

At this point the football world does not yet believe in Tom Brady, and most of Steelers Nation views Bill Belichick as a retread who the Steelers used to beat up on when he was dismally failing as head coach of the Cleveland Browns.

The Steelers returned to Foxboro to start the year on Monday Night Football with revenge on their mind. Instead they got another rude awakening, as New England picked off Kordell Stewart’s first pass and did not even bother to attempt to run the ball in the second half as they won 30-14.

2004 – Rookie Roethlisberger is for Real…

The Patriots bring one of the NFL’s longest winning streaks to Heinz Field, but Ben Roethlisberger has his own streak, having won his first five starts. With a lot of help from the defense and Jerome Bettis and Duce Staley, Roethlisberger improves his streak winning streak to six.

2004 AFC Championship Game – …Roethlisberger is a Rookie After All

The Steelers are at home, but everyone knows that that Patriots are the favorite. Tom Brady plays some flawless ball, while Ben looks every bit the rookie throwing three interceptions, losing his first game in 16 starts.

The third game of the season brings the Patriots to Pittsburgh, and they leave winners 23-20.

The Steelers take a 9-3 record into Foxboro against a Patriots team that is in route to the NFL’s first 16-0 regular season mark. Safety Anthony Smith (someone tape his mouth shut) guarantees a victory but gets torched by Tom Brady twice, as the Patriots won 34 to 13. The game was even more lopsided than the score might make it appear.

The Steelers travel to Foxboro and defeat the Patriots for the first time there since 1997. The Steelers are dominant on both offense and defense, and while their special teams did allow for a couple of long run backs, they did also secure a bobbled kick return, which the offense turned into points.
Milestone/turning point? Well, its too hard to say if this game will present milestones or turning points, but this win marks:

There’s no other way to describe the Patriots 39-26 defeat of the Steelers at Heinz Field. Forget about the Steelers late scoring surge, that was tantamount to crying “no I’ll be good!” at the point that the reality of an Old Fashioned Spanking sets in.

The story before this game was Tom Brady’s ownership of the Pittsburgh Steelers. Mike Tomlin heard none of it. That story belonged to an earlier generation. The Steelers boasted the NFL’s number one defense, yet no true quarterback had tested them. And no quarterback was hotter than Tom Brady in the fall of ’11.

Tom Brady was supposed to bring the Steelers defense down to earth. Dick LeBeau and Carnell Lake elected not to pass that on their team.

The Steelers went on the attack, scoring on the opening drive, taking control of a game in a way they had not since the ’05 divisional playoffs vs. the Colts. Ben Roethlisberger threw 50 passes, hitting 9 different receivers as the Steelers dominated the tempo.

Dick LeBeau opened his bag of tricks, playing more press coverage that anyone had seen him play before or since. And it worked. Playing without James Farrior and James Harrison, the Steelers defense managed to harass Tom Brady, as LaMarr Woodley sacked him twice. Deion Branch and Wes Welker had been tearing up the NFL, but Dick LeBeau kept them both under 40 yards catching, with the help of youngsters like Cortez Allen.

The Steelers sealed the game when Brett Keisel strip sacked Brady, and Troy Polamalu knocked the ball out of bounds.

By comparison, the 2010 beating the Steelers suffered at the hands of the Patriots seemed pleasant by comparison. Unlike the 2010 spanking, the Steelers actually made a show of it when it counted. The Patriots began the game jumping to 17-3 lead and held a 24-10 lead at half time.

Two Ben Roethlisberger touchdowns to Jerricho Cotchery had the score tied at 24-24 midway through the fourth quarter before Tom Brady went on a rampage that devastated the Steelers defense. The Patriot’s offense exploded, putting 31 points on the board in a quarter and a half. The Steelers answered with a measly 7.

The Steelers left Foxboro with a 2-6 record, and their 2013 season appeared to have already be spiraled hopelessly out of control.

Going into the 2015 season, everyone knew the Steelers defense was going to struggle based on the preseason performance of first year defensive coordinator Keith Butler. The season opener on Thursday night against the Patriots, with Tom Brady freshly freed from his Deflategate suspicion would confirm this fact.

The Patriots responded with a Brady to Gronkowski hookup that put the game away before the Steelers scored a face-saving touchdown with 2 seconds remaining.

The prospect of Landry Jones vs. Tom Brady doesn’t exactly instill fear into Bill Belichick nor should it. But with Ben Roethlisberger out, Mike Tomlin didn’t hesitate to turn to the man whom he and Todd Haley had groomed as Big Ben’s understudy.

The Patriots jumped to a 14 to 0 lead early, but Landry Jones led the Steelers to score 13 unanswered points. As they had done far too many times in the past, the Patriots Gronked the Steelers, with a Brady to Gronkowski hook up improving New England’s lead to 20-13 late in the third quarter.

Chris Boswell cut that lead to 16 points early in the 4th quarter, but another Brady-Rob Gronkowski strike set up LeGarrette Blount touchdown that would effectively end the game.

Steelers Nation went into the game salivating at the possibility of fielding Ben Roethlisberger, Le’Veon Bell and Antonio Brown against the New England Patriots for the first time….

Alas, Le’Veon Bell injured his groin early in the first quarter and was forced to leave the game. With Sammie Coates dropping passes, and Eli Rogers and Cobi Hamilton, it made it easy for the Patriots to focus all of their efforts on shutting down Antonio Brown.

On the defensive side of the ball, Tom Brady flailed the Steelers defense with Ramsey Bolton like zeal, as the Steelers were unable to get pressure, allowing Brady to easily carve up their zone defense schemes. The final score read 36 to 17, but the harsh truth is that even with the Patriots doubling the score against the Steelers, the game wasn’t that close.

The game begins as the Steelers get an emotional lift from the sight of Ryan Shaizer in the press box, however on their second possession the Steelers lose Antonio Brown. However, Ben Roethlisberger, Le’Veon Bell, JuJu Smith-Schuster and Martavis Bryant step up in Brown’s absence.

The Steelers even take a 24 to 16 lead into the 4th quarter with a score set up by a Vince Williams interception of Tom Brady. But then, as they always do, Brady to Gronk decimated the middle of the Steelers defense on consecutive passes of 26, 26 and 17 yards followed by a 2 point conversion hook up at the 0:56 second mark.

JuJu Smith-Schuster transformed a routine sideline pass into a 69 yard gain that brought the Steelers to the Patriots 10. One play later, and Ben Roethlisberger hooked up with Jesse James who put the Steelers back ahead with a touchdown….

A fire drill like situation ensues as the Steelers have no timeouts left. Darrius Heyward-Bey catches a 3 yard pass which probably he should have dropped, and Ben Roethlisberger gets intercepted (despite blatant uncalled pass interference) and the Patriots win 27-21.

Take a moment to leave a comment to share your thoughts or memories on Steelers-Patriots contests of the past.

Thanks for visiting. Click here for more of Steel Curtain Rising.