Super Bowl XLIII was watched by millions around the globe, and today’s post will give you a chance to see the game through two very unique vantages.

As regular readers of this site know, Steel Curtain Rising is written out of Buenos Aires. Although yours truly has been here since 2001, Super Bowl XLIII was only the fourth Super Bowl I’ve seen down here. 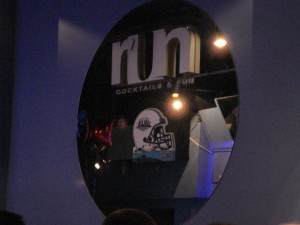 So the FAA’s annual Super Bowl party was held in the Run Bar, nestled on the other side of San Martin across the street from the vacant Harrods building.

My wife and I had reservations, but the place was packed. Our choices were in the back by the door, or up front by the screen. (I secretly wanted to be up front, but knowing my wife hates being so close to big screens, I let her pick – good move as the place got quite hot, and we were glad to be by the door.) 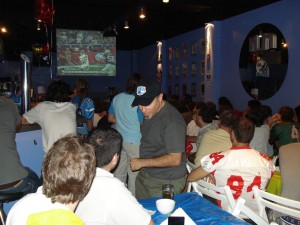 Prior to the game I got to meet Sergio Biagini, the President of the FAA, and we talked a little business, as we’re going to work together to try to see if we can get the NFL (or someone) to show more games down here. (See my rant about Direct TV’s “One Third of the Sunday Ticket” deal.)

Let the record reflect that the rooting at Run Bar was probably 30-40% pro Arizona, 20-25% pro Steelers, and the rest more or less neutral. But my wife and I had the good fortune to land a seat next to Gustavo, and Argentine Dr. who has been an avid Steelers Fan since the 1990’s.

We talked a fair amount of football, and I can tell you that the guy knows his stuff, and is even able to offer some rather nuanced opinions on Kordell Stewart.

The game itself of course was a heart stopper, but enjoyable nonetheless. The Cardinal’s cheering section was louder, but Steelers Nation’s contingent made up for any lack of quantity with quality.

When it was clear that the Steel Curtain Had Risen Again, we even let out the rallying cry of Steelers Nation, “Chew Tobacco, Chew Tobacco, Spit, Spit, Spit, If You Ain’t A Steelers Fan You Ain’t Sh_t, Go Steelers!” Truthfully, the rest of those present didn’t quite know what to make of that, and were somewhat taken aback.

Aside from victory itself and the glory of the Steelers Sixth Super Bowl, aside from the joy of spending it with my wife (she stayed home for Super Bowl XL and I would have enjoyed it more had she been there), perhaps the biggest plus came after the game, when I gave Gustavo one of my extra Terrible Towels. He’d mentioned something about getting one of them during a 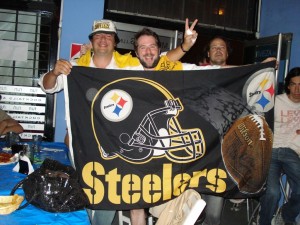 break, but he seemed pleasantly surprised after the game when I asked my wife to get the Towel out of her purse and give it to him.

Steel Curtain Rising is proud to share a first hand account of a friend who saw the game in Tampa:

I attended the game in Tampa Bay.The NFL Experience was OK but the entertainment was excellent. Prior to the kick off, John Legend sang for an hour followed by Journey. My Son-in-law and I then proceeded to the game after helping the local economy by buying a good amount of souvenirs.

We watched the 1st half and were pleased that the Steelers were on the winning side at halftime. The play by both teams was marginal.We watched the halftime show and hoped the Steelers would not sit back and just run the ball because the Cards score very quickly. We were really excited with only 5 minutes to go with Pit steal on the win side.

I watched with horror when I saw both safeties near the sidelines and no one anywhere near the middle. The ball was snapped and I did not see it happen because my eyes were glued on Fitzgerald. He glided across the middle and then the ball was in his hands.

Still no one around.

After he took off down the field James Farrior and Troy Polamalu went after him. They were 10 yds back and then #11 put the afterburners on. He pulled away so quickly, Troy tapped Farrior on the shoulder to give up. After that score, my heart sank.

Three minutes to go and it looked as if the Cards might just win it. I just kept shaking my head even as the Steelers marched down the field. When the clock had 35 sec. I was in total denial.

Big Ben threw to Holmes to the left and it went threw his hands. Depression began to set in.
I looked up and saw Ben running to his right and fired the ball Brett Favre style and Holmes was covered by 3. The next thing I saw was the refs arms go straight up and the stadium erupted.

The stadium looked as if it were Heinz Field south. The Terrible Towels outnumbered the Card fans by 10 to 1. They had between 7/10 thousand at most. As you can see, I am still not over the excitement yet.

I was there for #6 and history being made. [My wife] and the neighbors back in Phoenix were rooting for the Cards.

When I returned on the last leg of my flight, the plane was full. I was the only one in a black t-shirt. The Southwest staff were providing free drinks to the Card fans. I kidded the stewardess by asking if I was going to have to pay for the water I was drinking. She just smiled. – T. Lakeman

Thanks for visiting. Take a moment to share something from your Super Bowl experience, or just take a look around Steel Curtain Rising.

2 thoughts on “Super Bowl XLIII – From Tampa to Buenos Aires”