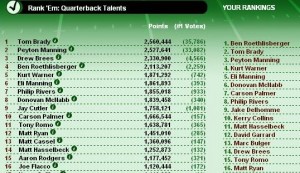 ESPN.com is polling the public, asking them to rank the NFL’s quarterbacks.

Brady and Manning come out on top, which is understandable (although that is not how Steel Curtain Rising ranked them, as you can see….)

At number three you have none other than….

That’s right, Drew Brees is currently besting Ben Roethlisberger. And it is not even close. The last time I checked, Brees had more than 200,000 votes than Ben.

Let’s get this straight, according the the website Pro Football Reference, both Brees and Ben have identical passer ratings of 89.5. OK, so then how to distinguish? Let’s look at how they’ve put those passer ratings to work for their respective teams:

Drew Brees has led his teams to the playoffs twice

Drew Brees has played in only three playoff games

And of course, Ben has won two Super Bowls in his first five years in the league.

Time to Rally Behind Roethlisberger

Make your voice heard. Click on the link below and go to ESPN.com, vote in their poll and let’s correct this mistake.

(If you have trouble loading the page, try refresh a few times.)

One thought on “Ben Roethlisberger Ranked Below Drew Brees? Time to Take Action”