This is old news to many, but the Pittsburgh Tribune Review has pulled the plug on the SteelersLive.com site as of September 1, 2009.

SteelersLive.com was originally home to one of the first Steelers websites back in 1995, although it carried a different domain name. I am not sure when the Trib. changed the URL to SteelersLive.com, but for many years it severed as the paper’s primary Steelers page.

Then, in 2005 (or perhaps 2004) the Tribune-Review split their Steelers sites in two, SteelersLive.com became a combination premium, pay-per-view site dubbed SteelersExtra which shared space with a section dedicated to user generated content.

As mentioned when Mike Prisuta resigned from the Tribune-Review, yours truly paid for a subscription to SteelersExtra for at least a year, if not two, just to read Prisuta’s columns. When Prisuta moved to the free section, I stopped paying.

The SteelersLive.com site was the Trib’s attempt to corner the market for all things Steelers in cyberspace. Fans could upload photos, create polls, run their own blog, and upload news links to any article that interested them.

The news link section was perhaps the most popular feature. Steel Curtain Rising probably had close to a hundred posts listed there, and they were a huge generator of traffic, both for new visitors and repeat traffic. Without SteelersLive.com, who knows where this site would be today?

I can tell you our unique visitor total would be way, way down. I am sure that many other sites, such as Steelers Today, can say the same thing. SteelersLive.com will be missed by many.

Short Sighted Strategy on the Part of the Tribune Review?

Setting Steel Curtain Rising’s self-interest aside, one has to wonder if this is the smart business move for the Tribune-Review.

Newspapers are getting hammered, and Steel Curtain Rising has gotten second hand confirmation that Tribune-Review did indeed pull the plug on SteelersLive.com to cut costs.

But what is the logic of dismantling the user-driven portion of the site? The Trib. simply took down the site. For about two weeks it was impossible to access it, then they simply directed people to their main Steelers page. 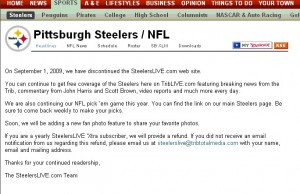 It wasn’t until the second week of September that I found a note on the main Steelers page informing that they’d killed SteelersLive.com. The sparse announcement says something about informing paid subscribers via email, but the Trib. made no other announcement nor gave advance notice to anyone.

I honestly do not know how much it would have cost to maintain the user-generated portion of the site, but going soley on the traffic Steel Curtain Rising from them, SteelersLive.com had a steady stable readership.

Managing space on a webpage can be tricky business, but one would think the Tribune-Review could have worked some of the user-generated elements into their main Steelers page.

In fact, they never seemed to do much to integrate the two pages. Shockingly enough, they did not even cross link them, which I always thought was a mistake.

Today’s economy is battering newspapers, and the Tribune-Review was losing money before the DOW and NYSE went south. I supposed the brass in the Tribs’ business department had their reasons, but simply letting SteelersLive.com go dark from one day to the next seems rather shortsighted.