Brett Favre dealt Bill Cowher his first coaching loss when he made his first start back on September 27, 1992. It was a wacky day, which set the tone for all future meetings between the Steelers and Favre. Consider:

Favre of course, has started an NFL record 275 consecutive games since that first meeting in 1992. A lot has changed since then. Favre has even switched teams – twice – but one thing remains constant:

Expect the uncanny when Number Four faces off against the Steelers.* 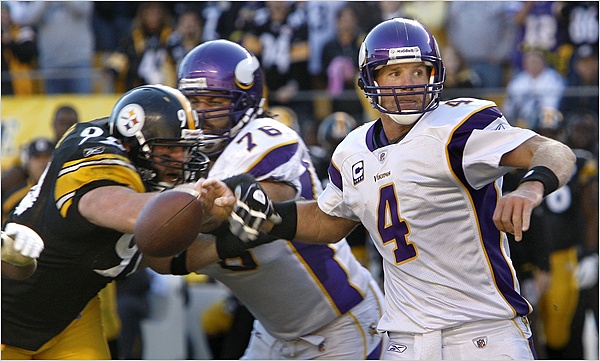 Sunday’s game at Heinz Field lived up to tradition.

At 6-0, Minnesota came to Pittsburgh as one of the NFL’s annual story book teams. Already armed with super-human Adrian Peterson at running back and an unforgiving defense, newly arrived 40 year old Brett Favre has shown that he still as enough late-game heroics left in him to transform the Vikings.

When the last Minnesota team with Super Bowl aspirations visited Pittsburgh in 1989, the Steelers exposed them as pretenders. With Brett Favre, they arrived today as contenders.

In spite of the Steelers 3 game winning streak they entered the game to a chorus of questions, the most pointed of which was: Can the Steelers defense close?

On Sunday the Steelers defense answered that question with a definitive “YES!”

A quick look at the stat sheet might lead one to think otherwise:

But the Steelers defense had it where it counted and when it counted. They not only held Brett Favre’s high octane offense to 10 points, they also put up 14 of their own.

Credit Brad Childress, Adrian Peterson, and Brett Favre for having their troops fired up and ready to go.

Most experts expected a high-flying shoot out. Instead the Steelers and Vikings gave the fans every bit of their money’s worth in a hard hitting slug fest.

From the get go, this one had the feel a game that would come down to who wanted it the most. For that reason, while the Steelers two-touchdown plays will rightly make the highlight reels, the key defensive stand for the Steelers perhaps came on the Viking’s first possession in the third quarter.

Favre took his team 65 yards to the Steelers one, gaining the lion’s share of his yards on a 35 yard pass that Troy Polamalu, and only Troy Polamalum prevented from becoming a touchdown.

Give an offense with the NFL’s best rusher a legendary quarterback a 1st and goal at the one and what happens? Most people would assume that is an easy six. Privately, most defenses would have conceded as much.

The Steel Curtain showed they were more than a match for two Adrian Peterson runs and two Favre throws from the one.

The other key series came at the end of the first half, when Ben Roethlisberger drove the Steelers 8 plays with a minute 39 remaining to land a touchdown with a 40 yard scoring strike.

On a day when balance and rhythm eluded Bruce Arian’s offense – Rashard Mendenhall averaged 6.9 yards a carry but only got the ball ten times. The Steelers offense created and then seized their own opportunities.

Fan of course will rightly remember this game because LaMarr Woodley and Keyaron Fox put on a clinic on seizing on opportunities.

The Steelers had looked to be salting the game away when Rashard Mendenhall fumbled at the goal line. Brett Favre, started at his 3 and marched his team down to the Steelers 8 yard line, and the Vikings looked poised to take the lead. Brett Keisel had other ideas, strip sacking Favre, and LaMarr Woodley did the rest:

Never let it be said that Bob Ligashesky’s special teams are not generous. On Sunday they were kind enough to let the Vikings right back in the game (that’s 21 points off of special teams in 7 games) after Woodley’s touchdown.

With 3:21 remaining, Favre drove his team down the field again and it looked like he was about to pull out one of his patiented come from behind wins. A routine dump-off to Chester Taylor looked to bring them closer. But strange things happen when Favre shares the field with the Steelers and it was Keyaron Fox’s time to strike.

The victory over the Vikings gives the Steelers a 5-2 record heading into the bye week.

The Steelers still “fall short of perfection” as Mike Tomlin will surely say. Nor did they turn in a complete enough performance to call it a “statement game.”

But on Sunday the Steelers proved they can defeat a contender.

*The uncanny streak followed me down to Buenos Aires. I was out watching a game of the Argentine American Football Association, and my wife realized that something funky was up with Direct TV Plus — she made sure the game got recorded — hence I have nominated her for a game ball.