Noll and His Nemisis

Chuck Noll was a model of serenity. Jerry Glanville was flamboyant for the sake of flamboyance. 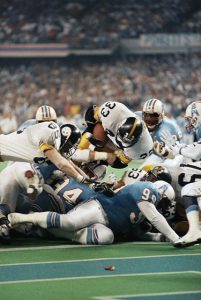 Noll represented everything honorable about the game, even criticizing his players in court once for being part of the NFL’s “criminal element.”

Glanville served as Noll’s anti-hero. Glanville encouraged dirty play, drawing an angry rebuke from Noll on the floor of the Astrodome.

The Oilers had humiliated the 1989 Steelers in the Astrodome to the tune of 27-0. With the benefit of a fourth time out, Houston won the second match up at Three Rivers Stadium.

It was New Year’s eve, it was the final NFL game of the 1980’s, the Houston Oilers and Pittsburgh Steelers were again playing in the “House of Pain.”

And this time it was for all of the marbles.

Houston won the toss and drove straight down the field until the Pittsburgh defense stopped them at the 40. From there, Jerry Glanville attempted a 55 yard field goal which fell short.

Unable to take advantage, the Steelers were forced to punt the ball back. But the Oilers did very little and Glanville sent out Greg Montgomery to punt.

Untouched, rookie Jerry Olsavsky stormed through the middle of the Houston line and blocked the punt with Pittsburgh recovering at the Houston 23. The Steelers advanced to the Oiler’s 9 yard line, until their drive stalled at 4th and 1.

At the snap Brister pitched the ball to Tim Worley who forced linebacker Robert Lyles to miss and ran untouched until the one where he plowed through Pro-Bowl safety Bubba McDowell for the game’s first score.

With 2:36 remaining in the first quarter, Chuck Noll’s delivered a message:

Houston’s responded aggressively, driving 96 yards to the Pittsburgh 3, but there Rod Rust’s defense, a Mike Munchack penalty and a Haywood Jefferies drop in the end zone forced the Oilers to settle for 3.

The Oilers defense struck next, stripping the ball from Tim Worley and regaining possession at Pittsburgh’s 41. Moon drove his team to the Steelers 17 yard line only to see Jerry Glanville lose his nerve when Rust’s defense forced 4th and 1; another Tony Zendejas field goal made it 7-6.

The Steelers advanced to the Houston 9, but two plays only yielded a single yard. With 1:57 left, facing a 4th and 1, Chuck Noll opted to kick, giving Pittsburgh a 10-6 lead.

Houston narrowed the score in the third quarter, again relying on the leg of Tony Zendejas after a short drive, making the score 10-9.

The Steelers answered in kind later in the third quarter, making the score 13-9 on another Gary Anderson field goal, this one for thirty yards which capped a 7 play 30 yard drive.

Pittsburgh got the ball back quickly, and after a nine play 33 yard drive, Gary Anderson booted in a 48 yard field goal – one that split the uprights with about ten yards to spare….

The Oilers might have been down 16-9 in the fourth quarter, but they were not out, as Glanville turned the game over to Warren Moon and his quartet of Pro-Bowl caliber receivers.

After a three and out and 25 yard punt by Harry Newsome (eat your heart out Mitch Berger), Moon and his receivers went to work again, this time with a 5 play 38 yard drive that ended with 9 yard touchdown to Ernest Givens, giving Houston a 23-16 lead.

Merril Hoge Responds to the Call

With 5:16 to go, the Steelers started their final drive in regulation from their own 18. Bubby Brister declared to Merril Hoge “Its time to find out what we’re made of.”

And find out they did.

Brister handed off to Hoge, who darted to his right and handed it to Dwight Stone — Tom Moore went to his bag of tricks – and the Oilers gave up another 22 yards on Stone’s reverse.

A Houston offsides penalty brought the Steelers to the Oilers 12 yard line as the two minute warning loomed.

Noll called Hoge’s number again, and Number 33 bowled through the line for a 1 yard touchdown to tie the game at 23-23, with 46 seconds left in regulation.

An Overtime for the Ages

The Steelers won the toss in overtime, but failed to capitalize on offense, and another horrendously poor punt gave the Oilers the ball at the Pittsburgh 45. The Steelers story book season, it appeared, was about to end.

For the entire game the Oilers had been running right. But on their first play in OT, tight end Chris Verhulst lined up next to the tackle, a tendency the Steelers defense knew signaled a run to the left.

The ball was snapped. Warren Moon handed off to Lorenzo White.

Greg Lloyd filled the gap at tackle, forcing White to the Outside…

On New Year’s Eve 1989, Rod Woodson made the greatest play of his Steelers career.

As he told Sport’s Illustrated’s Rick Reilly, “This is a sell out game. If you don’t sell your body now and go flying at someone you’ll never do it.”

The Steelers looked to Number 33 again, and Merril Hoge again answered in the affirmative, dragging Houston safety Jeff Donaldson for the last five, for a first down. Hoge then added three more, taking it to the Houston 33.

Third down brought the Steelers nothing.

It was Gary Anderson’s time.

Gary Anderson Kicks One For His Father

As Chuck Noll said, “thank God we’re in a dome” — Anderson had not attempted a 50 yarder the whole season.

Houston called a time out. Tunch Ilkin approached Anderson and confided “I wouldn’t want anyone out here kicking this but you.”

Anderson dedicated the kick to his father, the man who’d taught him how to coach, who was in San Diego, suffering from a rare lung disease.

Brian Blankenship snapped to Harry Newsome, Anderson’s foot hit the ball clean and the kick was off.

The Steelers had defeated the Oilers 26-23 to win the AFC Wild Card Game.

Knocked out of the playoffs and having dropped three straight, a dejected Jerry Glanville trudged toward the locker room with his head hung low – with a security escort by his side.

Meanwhile the Steelers sidelines erupted, as teammates circled to embrace Gary Anderson. The normally stoic Chuck Noll threw off his head gear and ran over to pat Anderson on the helmet.

The fact that they’d pulled this off despite their horrendous start was lost on no one. When asked how the 1989 Steelers pulled off this feat, Joe Greene’s explanation was simple and concise “They believe.”

Believe they did. And in the process, the 1989 Pittsburgh Steelers delivered the Emperor Chuck Noll one Last Hurrah!

Thanks for visiting. To check out the entire series on the 1989 Steelers, click here and scroll down.