Since arriving as a first round pick in 2004, Steelers quarterback Ben Roethlisberger has accomplished many, many things.

Now, Roethlisberger can add another feather into his cap – yesterday Ben Roethlisberger’s teammates voted him as the Pittsburgh Steelers Most Valuable Player for 2009.

This is the first time Ben has won the award, and that marks a certain sort of milestone. Although most of the press Ben gets has portrayed him in a positive light, there have been rumblings here and there that he was not universally liked in the Steelers locker room.

Kordell Stewart was the last quarterback to win the award in 2001, and before him Neil O’Donnell won it in 1995. Following those two, one needs to go back to the 1978 and 1979 seasons to find a quarterback who won that award, when Terry Bradshaw won the award during the seasons when he led the team to victories in Super Bowls XIII and XIV.

It is ironic to note that Stewart’s and O’Donnell’s MVP awards marked their final seasons as starters. Steel Curtain Rising feels safe in saying that, barring injury, a similar fate will not befall Ben.

Not to Nit Pick, But…

Keying in on the fact that Ben will play in Miami – the place where he got his first start, Ed Bouchette points out that: 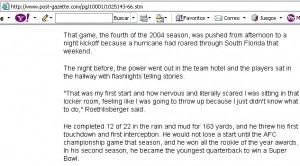 While the game was in fact, Ben’s first start, it was actually the third game of the season, not the fourth. And Ben had already thrown two touchdowns and two interceptions the week prior in relief of Tommy Maddox against Baltimore.