Lest anyone be mistaken by the headline, this article offers no defense of Ben Roethlisberger.

Nor is this thread intended to decry the “one-sided” treatment that Ben has gotten in the press. I am not terribly sympathetic to that argument, but I concede that the article referenced makes some valid points.

In the same vein, others have already pondered the significance of Roger Goodell’s suspension of someone who neither failed a drug test, nor was arrested nor charged with a crime.

Roethlisberger richly deserves the criticism the media vultures are heaping on him. Roethlisberger has granted the press every right to question is locker room presence and leadership skills and rip into to his reputation.

But open season on Roethlisberger does come with one caveat.

Unfortunately for some, that seems to be a problem.

A Trail of Tears Perhaps, but Not Police Reports

ESPN.com’s Gene Wojciechowski is an excellent writer and his analysis of the NFC Central is always worth the read.

He recently lit into Roethlisberger, going as far as to suggest that Dan Rooney, if forced to confess, would admit to regretting not trading for Donovan McNabb.

But in building up his argument, Wojciechowski takes a little license with the facts. 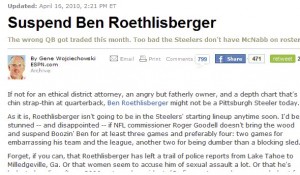 “Forget, if you can, that Roethlisberger has left a trail of police reports from Lake Tahoe to Milledgeville, Ga.” [Emphasis added.]

Ah, the power of two words. If Wojciechowski had only written “…Roethlisberger has left a trail of sexual assault allegations from Lake Tahoe to Milledgeville” his prose would have been just as lyrically compelling, just as damming. He only would have had to add an extra word.

And he would have had the virtue of being factually correct.

Alas, Wojciechowski’s word choice of “police reports” takes him outside the facts.

One undisputable fact behind the Lake Tahoe allegation is that the woman in question never, ever went to the police.

While the Georgia incident rightly casts the Lake Tahoe allegation in a new light, it changes none of the objective facts on the ground in Nevada.

The woman never called the police, boasted to coworkers about what she had done with Roethlisberger, and even opined that she hoped for a “little Ben.”

Legally there is a world of difference between an accusation in a civil suit and a criminal complaint.

Wojciechowski undoubtedly knows this, but his article brazenly ignores this.

We can only speculate because Steel Curtain Rising has contacted Wojciechowski via email inviting him to comment, and a week later has received no response.

A day or so after Fred Bright announced his decision not to prosecute Ben Roethlisberger, ESPN’s Adam Schefter issued a scathing video commentary on the Steelers quarterback.

Steel Curtain Rising takes no issue with the tone or tenor of Schefter’s remarks.

However, when Schefter offered that that Roethlisberger’s off the field behavior was disrupting the team, he commented that this was not the first incident, reminding everyone of his motorcycle accident and the Nevada affair.

To emphasize how much of a disruption Ben had become for the team, Schefter said that Ben had caused off the field distractions “three straight off seasons,” referencing the motorcycle accident, the Lake Tahoe allegation, and the Georgia allegation.

Later, before concluding his video segment, to drive his point home Schefter again made the “three straight off seasons” remark.

A curious remark to say the least. When told of it my Argentine wife, who knows very little of American football, exclaimed, “but the motorcycle accident happened years ago, didn’t it?”

Almost four years to be exact.

Which of course means that Schefter conveniently simply forgot or ignored the fact that, at least as far as the public has knowledge, Ben’s off the field behavior did nothing to disrupt the Steelers during the 2007 and 2008 seasons.

The interesting thing about this, is that the video segment is no longer available on ESPN.com. Nor can you find it on YouTube. Perhaps some editor decided to take it off line realizing that, for whatever problems the Nevada and Georgia incidents are causing the Steelers, they were separated by two full years from the motorcycle accident.

Even if this is the case, no mention of Schefter’s error can be found on ESPN’s corrections page nor by the site’s ombudsman. No email address for Schefter is present on the site, so he could not be reached directly.

Riding Off Into the Sun Set

Liberality with the facts is not confined to ESPN, but also extends to the New York Times, one of the United States’ most respected publications.

Arguing that the NFL has not been sufficiently harsh with Roethlisberger in the past, Times columnist William C. Rhoden chides the league for its lax response to Ben’s 2006 motorcycle accident.

Some may regard Rhoden’s position as overzealous, but his logic is sound. If only the same could be said of the facts he marshals to support it:

“Really? A high-profile quarterback riding without a helmet and without a valid motorcycle license nearly kills himself and then says during the mending process that he would ride again — without a helmet. Sure sounds like a cry for help.” [Emphasis added.]

Upon reading this, my first reaction was, “didn’t Ben say just the opposite in this first interviews following the accident….?”

Roethlisberger told Good Morning America in the spring/summer of 2006 that he was not sure if he would ride again. 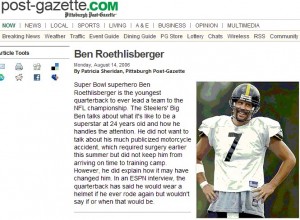 And he told ESPN, in an interview that the Post-Gazette’s Patricia Sheridan cited, that “was not sure if he’d ride again, but if he did it would be with a helmet.”

Unfortunately, Mr. Rhoden did not respond to an email message.

…Ah But What about the SI Article?

As everyone in Steelers Nation knows, Sports Illustrated just published a cover story on Ben Roethlisberger, and the portrait they painted was not pretty.

But about the only new information they unearthed was to report that Ben has been riding his motorbike without a helmet since the accident.

One report is from an a neighbor who refuses to give his name, and another from an unnamed source at KDKA who says that they filmed Ben riding without a helmet but declined to run the footage, a claim KDKA has denied.

This is an explosive charge which will and should blacken Ben’s image even more if true.

But it changes nothing about Rhoden’s article because:

And if he had sources, he owed it to his readers to share that with them.

Ben Deserves What His Critics are Calling For…

Ben Roethlisberger only has himself has to blame for the trashing of his image is taking.

Even if the young woman voluntarily entered the bathroom and even if what happened inside was consensual, Ben bought the battering he now suffers lock-stock-and-barrel the moment he shut that door.

It is hard to know what led these established journalists to produce material that contained statements which were factually incorrect. Absent their response, at best one can only presume that it was a lack of inclination to verify key facts, at worst it was a conscious corner cutting with an eye toward spicing up the story.

Either way this is a cause for shame.

It is ironic too. Ben’s critics claim that the public is entitled to know the facts.

They are right of course. The public does deserve the facts

But so does Ben.

Thanks for visiting. Click here for more of the Watch Tower’s analysis of the Steelers press coverage.