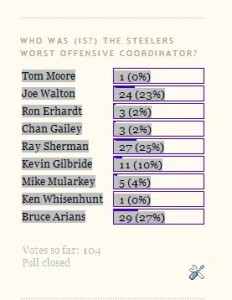 Perhaps it is odd to recap a poll that closed months ago, but between the 2010 NFL draft, the Steelers Judiciary woes, and working a second job, I simply have not had time.

The poll began in February and ran for over a month, attracting over 100 votes. Bruce Arians “won” the poll is a little of a surprise, which I’ll address at the end.

For now, let’s look at the other “contenders.”

Ken Whisenhunt and Tom Moore drew only a single votes, and that is one vote too many for both men.

Chan Gailey and Ron Erhardt polled three votes a piece, which is a slight surprise, given that so many fans blame Gailey for calling goal line passes that were intercepted in the 1997 AFC Championship game when he had Jerome Bettis in his backfield.

Gailey is not worthy of the “worst coordinator” ignominy, but I expected that more fans would beg to differ.

Inspector gadget, aka Mike Mularkey picked up five votes, and while Mularkey perhaps got a little too captivated with his own innovations, Pittsburgh’s offense enjoyed a lot of success during his tenure.

Kevin Gilbride was the first to break double digits with 11 votes and that is how it should be as he is the first offensive coordinator to merit serious consideration for the “worst ever title.” Bill Cowher’s hiring of Gilbride, he of run and shoot fame, mystified me from its announcement to Gilbride’s dismissal. Gilbride never seemed to “get it.”

Gilbride was bad, but he was not the worst Steelers offensive coordinator ever.

The poll went up while the article “Walton’s Mountain, Good Night Chuck” was on Steel Curtain Rising’s home page.

So it is no surprise there that Walton took an early lead.

But the Walton article got put down and ultimately off the home page, Ray Sherman and Bruce Arians picked up support quickly.

The real debate is between Sherman and Walton.

Ray Sherman had one ill-fated season as the Steelers offensive coordinator. Picked after the 1997 season on the heels of Jerry Jones surprise decision to hire Chan Gailey as his head coach, Sherman arrived as a second tier choice.

Still, Sherman had a good track record with Brad Johnson and it was thought that he would transform Kordell Stewart into a finished product.

Instead Sherman was an unmitigated disaster.

Stewart had his own weaknesses, so perhaps it is too harsh to condemn Sherman for “ruining him,” but Ray Sherman certainly failed to foster Kordell Stewart’s development.

Under Sherman, Stewart became tentative, the long ball disappeared and Sherman was either unwilling or unable to call plays that capitalized on Stewart’s mobility. Bill Cowher took note and stripped Sherman of his play calling duties late in the season.

Sherman’s offense was predictable. I can remember a third and long situation during one late-season drubbing, where I said to my buddies at the Baltimore’s Purple Goose Saloon, “Watch, it is going to be a weakside pitch to Fred McAfee.” Sherman called just that, and to the surprise of no one, the Steelers failed to convert.

In Sherman’s defense, John Jackson’s departure had already weakened his offensive line and disintegrated further with Justin Strzelczyk’s injury. The Steelers had also lost Yancy Thigpen and neither Charles Johnson, Will Blackwell nor Jahine Arnold could pick up the slack.

Why It Is Walton

I’ve already written at length about Joe Walton (click here to read the full article) so I’ll only add a few more comments.

Walton’s offensive line had its own weaknesses and his wide receiving corps was less than stealer.

Like Sherman, Walton shares in possibly having had a hand in ruining a promising young quarterback whose raw talent mirrored his myriad flaws.

On balance, however, for me Walton was worse than Sherman because he stubbornly refused to change even when evidence mounted that his system was failing. Worse yet, the Steelers had established themselves as a team on the rise after the 1989 season, and they floundered under Walton.

A final point in Walton’s “favor.” Ray Sherman arrived in 1998, just as the Steelers defense ws beginning to decline. In 1990 however, the Steelers had the number one overall defense, an effort wasted by Walton and his offense.

Steel Curtain Rising regulars know how I went from being an Arians’ Attacker to an Arians Agnostic, so I will not recount that journey here (you can click on the highlighted links to read more.)

One does not need to be an Arians’ Apologist to know one thing: The Steelers won Super Bowl XLIII with Arians as offensive coordinator, and Arians’ game plan played a crucial part in the Steelers victory.

Arians may not be the Steelers best offensive coordinator, but he certainly is not the worst.