Fans and media will focus on how Tomlin handles the quarterback rotation, who replaces Willie Colon, who back ups Rasshard Mendenhall, and Troy Polamalu’s health. And so they should. The answers to those questions will have the greatest impact on the Steelers fortunes in 2010.

But the Steelers must answer additional personnel development questions in Latrobe this summer and the impact of the answers to those questions will be felt long after the 2010 season concludes.

Steel Curtain Rising commences training camp 2010 with a look at which players and at which positions must show promise this summer for the Steelers to prosper in the future.

Looking Back Before Looking Ahead

The Steelers have a problem, although neither the press nor Steelers Nation seem to be very aware of it, if a poll conducted here during the spring is any indication. 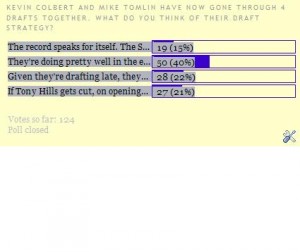 The problem is quite simple.

The Steelers drafting has been subpar of late.

Few have noticed this fact. This happens with two Super Bowl victories in 4 years. In the summer of 1980 who worried the quality of the Steelers 1977 and 1978 drafts?

The Steelers won One for the Thumb in 2005. There is no coincidence that Super Bowl XL came four years after the 2002 draft, Kevin Colbert’s best ever.

Steel Curtain Rising has reviewed the Colbert Record extensively, and there is no reason to rehash that again.

But the Steelers 2010 free agent signing spree turned heads. To its credit, management acted aggressively to address key need areas. But, has has been indicated here before, you can tie each free agent signing to a major draft disappointment.

Draftees from the Steelers 2006 draft should be blossoming now and the 2008 class should be coming into its own.

Santonio Holmes’s trade and Willie Colon’s injury mean the Steelers will not have a single member of their 2006 draft class on their 2010 roster.

Likewise, if Tony Hills gets cut, as he almost certainly would have save for the injury to Colon, the Steelers will start 2010 with an equal number of players from the 2002 and 2008 drafts.

Neither trend is encouraging, but it need not be fatal either – if the players below step it up.

The Steelers final 2008 draft pick got hurt in camp but rejoined the practice squad in November.
Mundy looked sharp in preseason in 2009 and earned a roster spot and some playing time during the season joining one of the most shell-shocked Steelers secondaries in memory.

For awhile, there was talk that the Steelers might let Ryan Clark might depart and promote Mundy to the starting role. But the Steelers signing of Will Allen splashes cold water on that theory.

Regardless, Clark is 31 and Polamalu is 28, Allen is 27 and Mundy is the only player behind team. A productive camp in 2010 for Mundy will pay dividends in the future.

In the 2009 NFL draft the Steelers returned to the Bill Cowher era’s unofficial policy of using at least one premium pick on an offensive line man by taking Kraig Urbik in the third round.

Some sounded alarm bells when 2009 rookie free agent Ramon Foster started while Urbik failed to dress. Such panic is premature.

In 1992 rookie, free agent Gary Howe eclipsed third round pick Joel Steed by starting after Gerald Williams went down. Everyone forgets that today, after Howe ate himself out of the league and Steed developed into a Pro Bowler.

The Steelers have suffered from far too much instability on their offensive line of late, but Urbik can stabilize a lot of things by at least signaling that he’ll someday be starter worthy.

Ike Taylor’s contract expires after 2010. Bryant McFadden’s return helps, but McFadden will never develop into a shut down corner.

At the end of the day, Gay’s place in the NFL is as quality number 3 corner, which is good for a 5th round pick.

But the Steelers need a strong corner for the future to emerge this summer, and Keenan Lewis must be that man. He need not transform himself into a stud; if Lewis establishes himself as the secondary’s up and coming corner everyone forgets Joe Burnette beat him out for playing time in 2009.

Steelers Nation worried when Timmons did not play in 2007, wondered why he didn’t start in spite of his penchant for splash plays in 2008, and wavered after watching Timmons’ inconsistent play in 2009.

James Farrior finally started slowing a step in 2009. Larry Foote’s return gives the Steelers a little bit of a cushion at this key position, but Pittsburgh can in no way afford to replace both inside linebacker positions.

The real Lawrence Timmons must step up in 2010, and the Steelers need the real Timmons to be the splash play specialist that has flashed so promisingly.

Last year Mike Wallace showed that immediate impact wide receivers can be found in the draft’s third round.

Fortunately, 2010 third round pick Emmanuel Sanders need not feel pressure to walk in Wallace’s footsteps. Randel El’s return and Arnaz Battle’s arrival should give the Steelers solid veteran depth at wide out in 2010.

But 2011 and beyond bring another story. Hines Ward is 34, and (knock on wood) continues to go strong. However, Ward has already said he would hang it up should the Steelers win another Super Bowl, and if the 2011 season ends in lock out, he might just decide to retire anyway.

The Steelers need to groom a eventual starting wide out, and this summer Sanders needs to show he is capable of being that man.

James Harrison is 32 and LaMarr Woodley could be an unrestricted free agent on the open market depending on how the league’s labor situation works out.

Like Sanders, Jason Worilds need not produce let alone play much in 2010, but he most certainly does need to show he is capable of making the transition from college defensive end to starting outside linebacker in the NFL.

Preview of the Next Half Decade

Dig into the quarterback derby; cross your fingers in hopes that Sean Kluger can pull rabbits out of hats on the offensive line; pray for Polamalu’s health; enjoy all of these and the other story lines that will emerge in Latrobe in the days to come.

But keep an ear and an eye attuned to subplots about the players mentioned above. Their development, or lack there of, this summer at St. Vincents will provide a pretty good preview of the Steelers fortunes for the next five years or so.