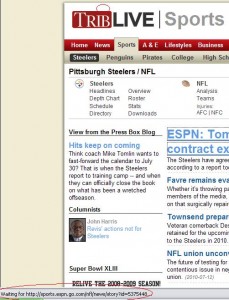 The Steelers decision to extend Mike Tomlin’s contract was met with great fanfare in Steelers Nation, but the Tomlin story came with a twist involving the Tribune Review that went largely unnoticed.

Who Reported the Story?

The Post-Gazette’s Ed Bouchette broke the story and most major media outlets gave him credit. However, on the day the news broke, the Tribune Review’s Steelers page carried a headline stating “ESPN Reports Tomlin Contract Extension.”

Not only were they deflecting credit from their cross town rival, but they had no content of their own – they were linking directly to ESPN.com. (See the screen shot.)

The ironic thing about it is that the ESPN.com piece, penned by James Walker, credited Ed Bouchette and the Post-Gazette for breaking the news!

Rooney on the Record Seeking Extension?

A day later the Tribune Review’s Scott Brown had his own story. He did not get any of the principles on the record, but he went and did get quotes from some of the players.

[Art] Rooney had said several times during the offseason that the team intended to reach an agreement on a new contract with Tomlin, who has led the Steelers to a pair of division titles and is the youngest coach to win a Super Bowl.

If this is the case, it is news.

Rooney had been on the record in interviews with both Bouchette and Brown as saying he wanted Mike Tomlin to coach for the Steelers for a long time. But, if memory serves, Rooney declined to affirm that he would extend Tomlin’s contract.

This led to speculation that no such extension was forth coming, and in fact the general consensus of opinion in the press at the conclusion of Steelers OTA’s was that the Rooneys were in fact not going to extend Tomlin’s contract.

If Brown had information from Rooney, either through off the record or on the record conversations, that the team was going to open contract talks with the head coach, then he should have reported it.

If Brown never heard Rooney make such comments, then his statement makes no sense.

So be it. Tomlin will soon have his extension, and that will be it.

Thanks for visiting. For more media analysis of the Steelers press coverage, visit the Steel Curtain Rising’s Watch Tower.

2 thoughts on “Watch Tower: Tomlin Extension Story Takes a Twist at the Trib…”