Tuesday: Mike Tomlin declares the Steelers-Ravens rivalry to be the “Best in the NFL.”

Contradiction? The way most NFL fans like to imagine things, almost certainly.

A product of changing times? Another possibility, but maybe this has more to do with the collective memory preferences of NFL fans above a certain age.

Division rivalries, it seems, are like memories. They’re real, but instead of being something that you can put your hands on, they’re something to be experienced.

All of which makes them so difficult to define. Here’s a shot at it anyway.

Upon reading Ed Bouchette’s story that Ray Lewis was offering support to Ben Roethlisberger my first thought was, “They don’t make division rivalries like they used to.”

Fans above, say 30, remember an age when things were different, or at least portrayed differently. Yours truly falls into both categories, as Steel Curtain Rising’s tribute to the 1989 Steelers testifies.

A year ago, in writing about the Steelers-Browns rivalry I had this to say:

Division rivalries are not what they used to be.

Certainly the bitterness between Baltimore and Pittsburgh runs deep. But the intensity of the Steelers modern day rivalry with the Ravens arises from the reality these two teams have been the biggest boys on the block in the AFC Central/North for a decade.

The hatred between the Steelers and the Browns wasn’t so much part of the job description; it was hardwired into the men’s DNA.

And that only scratches the surface. Who can forget the Browns blatant late, out of bounds hit on Mike Kruczek, and Jack Lambert’s furious reprisal?

Ah, those were the days, right?

During this week’s chat on PG Plus with Gerry Dulac, Steel Curtain Rising probed the veteran Steeler journalist for his reaction to the apparent contradiction between Tomlin’s pronouncement and Ray Lewis’ support for Ben Roethlisberger.

Dulac’s response was surprising to say the least (apologies for the quality of the screen shot): 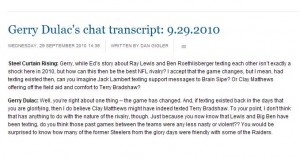 On the one-hand, it is hard to argue with someone who has been covering the Steelers since the 70’s. Logic demands that we accept that Gerry Dulac is in a far better position to know than you or I.

Still, part of me longs to resist this latent reality.

After all, isn’t this the same division (under a different name) that saw the normally unflappable Chuck Noll call out Jerry Glanville on the floor of the AstroDome?

Didn’t Sam Wyche once admonish fans in Cincinnati for throwing things on the field by comparing them to Cleveland Browns fans? The same Sam Wyche who a few weeks later ordered an on-sides kick against Glanville’s Oilers while leading 45-0?

Shifting sports, the news about Lewis and Roethlisberger calls to mind an interview with Kevin McHale before his final season with the Celtics, where he lamented, “You know, I liked it when we hated the Lakers… Now everyone has the same agent and hugs and kisses before and after the games.”

Sorry Gerry, but I can’t accept you word. They don’t make division rivalries like they used to….

Reminiscing about how good things were in the Good Old Days dates back to Greek Mythology and probably beyond that.

And that brings me back to Gerry Dulac’s final statement.

“Just because you now know that Lewis and Big Ben have been texting, do you think those past games between the teams were any less nasty or violent??”

Free agency might have take a slight edge off of division rivalries overall, and technology has probably weakened the façade that they once presented.

But no one in his right mind would dispute Dulac’s statement about the intensity of the Steelers-Ravens rivalry on the field.

I will not predict what will happen on the scoreboard Sunday at Heinz Field, but I say this with certainty.

In other words, on Sunday afternoon the banks of Pittsburgh’s North Shore will feature the very the essence of a division rivalry.

Just like it did in days long gone bye, and just like it will in days to come.