“Injuries will not be an excuse. The Standard of Expectation Remains the Same.” – Mike Tomlin

Anyone tempted to say “NFL division rivalries are not what they used to be” must watch this game. 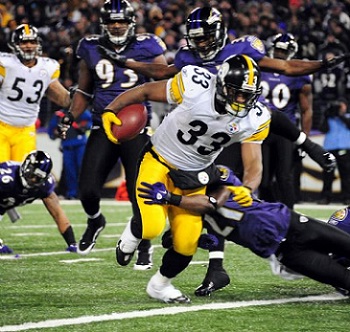 Instead, the contest came down to playmaking ability, and Pittsburgh prevailed.

To whom do you award the game ball for last night? Ben Roethlisberger, Isaac Redman, Shaun Suisham, or perhaps Troy Polamalu? You could easily double the choices presented above (vote please) for the game ball award and still snub someone on the Steelers.

But if Steelers Nation will remember the heroic efforts of a few key players in the victory over the Ravens, we must not lose sight of the reality that this victory represented a team effort.

Both the Steelers and the Ravens posted nearly identical 3rd down conversion rates, rushing averages, passing totals, and each committed a turnover

Against this backdrop, the Steelers were losing starters, forcing their kicker to double as a punter, and shuffling men and out of their line up. One man goes down, another steps in.

Nonetheless, with just over three minutes left to play the Ravens stood at the Steelers 43 and Ray Rice had just run for 5 yards on first down. A number of commentators described the situation as “looking bleak” – an opinion not shared in the Steelers huddle.

The fireworks were only about to start…

Two First Round Picks and an Undrafted Free Agent Rookie

“Chicago has one Michael Jordan, who with the game on the line, takes the ball in his hands and he knows can score… Well, we had 4-5 guys who felt they could do that on any given play.” – Lynn Swann on “The Steelers of the ‘70s In Their Own Words”

Yes, Steel Curtain Rising showcased that quote after the AFC Championship game, and we will showcase it again when appropriate.

Another way of framing the issue is with a question:

They produce play makers who cause game-changing events for the Pittsburgh Steelers. Watch for yourself (available as of 11/6/16):

For the second week in a row, Troy Polamalu stepped up and altered the course of the game with everything on the line.

This is no accident. A phenomenal athlete, Troy Polamalu’s training and preparation routines are legendary. He studies film like no one else. But beyond that, Troy Polamalu has that intangible on the field presence, that instinct, that draws him to the ball during critical situations.
But Polamalu had help.

The Steelers had stalled badly in the Red Zone once before, and they got nowhere on first down. On second down Roethlisberger did what only Roethlisberger can do, with defenders clinging to him he managed to wiggle and pivot just enough to toss the ball away, saving a sack.

Redman got the message. More importantly, the 2009 training camp sensation lived true to his name, “Redzone Redman” breaking not one, but two tackles in route to the end zone.

Redman remains a work in progress, but on this night the undrafted rookie was the equal of the two ballyhooed first round draft day darlings.

The Steelers Road from Here

The victory over the Ravens puts the Steelers in the drivers seat in the AFC North race. As with many victories, this one was costly.

But the same logic says the Steelers should have already capitulated to attrition. It has not happened because this group of Pittsburgh Steelers concedes nothing to adversity.