One of the new NFL rules adopted this year is the decision to move kickoff from the 30 to the 35 yard line in the name of safety.

The more correct way to describe the rule is return the kickoff spot to the 35 yard line.

It would be difficult for younger NFL fans to know that based on the coverage the rule change got. Most writers simply praised or criticized the move and, in one tone or another, discussed how safety was bringing another change to the game.

Few bothered to remind readers that kickoffs had been made from the 35 yard line for generations, and even fewer bothered to talk about what impact the previous rule change had had.

The reaction to the rule changed seemed exaggerated then.

Fans who cut their teeth watching the game in the ‘80’s and early ‘90’s and share memories of dramatic kickoff returns changing the course of pivotal games. Indeed, Rod Woodson’s 84 kickoff return for a touchdown against San Diego not only sparked a comeback victory by the 1989 Steelers but arguably their remarkable playoff run.

During the first Joe Gibbs era Redskins return man Mike Nelms might not have been as popular as Theismann, Riggins, or “the Hogs” but even young Steelers Nation members growing up in exile in the DC area such as yours knew who he was.

Fans from that era certainly remember names like Detroit’s Mel Grey, Indy’s Clarence Verdin, or Philly’s Vai “You can’t hope to stop him you can only hope to contain him” Sikahema.

Much To Do About A Lot Less

The kickoffs, moved from the 30 to the 35, worked well. They were moved to help avoid injury and they did that last night. All but one were touchbacks. They should have just removed the kickoffs all together and have the offense start at the 20 after each score. Save time. As it stands now, it’s a charade. [Emphasis added.]

Such an attitude from someone born in the ‘80’s or ‘90’s would be easy to understand. But coming from someone who has covered the NFL since the early 1970’s?

That peeked my interest, and prompted me to do some research into the actual impact of the original movement of the ball from the 35 to the 30 yard line.

The results were interesting: 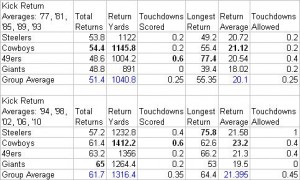 From this snap shot, we can draw a couple of quick conclusions:

The Steelers, playing in the AFC Central/AFC North and with a Dr. Jekyl and Mr. Hyde nature to their special teams performance, should not be considered representative of the NFL.

To draw a more representative sample, data from the same years was collected for the Cowboys, 49ers and Giants. Those three teams were chosen because they provided a good mixture of Super Bowl contenders/champions as well as bottom feeders at various points during the survey.

Those results are a little more thought provoking: 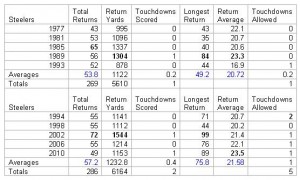 If you’ve read this far, you almost certainly ask “How does this affect the Steelers” when you hear of a new rule change. Let’s see:

As for kick off returns in general, these four teams did score touchdowns on kickoff returns about 40% more of the time and there were 20% more returned kicks following the movement of the kickoff spot. Likewise, the average “long” return increased 16%. However, return yardage only increased by about 6%.

At the end of the day, we can say that this mini-set of data indicates that returning the kickoff spot to the 35 yard line will impact the game at the expense of fewer touchdowns and shorter “long” kick off returns.

But does that mean that the return game will now become a “charade?” as Bouchette argues?

It may be counter-intuitive, but I’d argue for the opposite. If anything, I’d argue that the return to the old kickoff spot rule gives a greater advantage to the team that can consistently open holes for a return man who is a treat to “go all the way.”

I don’t mean to criticize Ed Bouchette for expressing the opposite opinion, nor would it be fair to single him out for ignoring the fact that kickoffs used to be spotted at the 35 as he is far from alone. He could have, however, backed up his argument with a little bit of research however….