Since 2000 the Pittsburgh Steelers and Baltimore Ravens have tested each other, often times with the AFC North crown in the balance, at times the stakes have even been higher.

Each contest brings out the best in both teams, and almost without fail each contest comes down to one decisive element:

And of course, these games have also been turned by freak turnovers and controversial calls. However, the December 2nd Steelers-Ravens game at M&T Stadium in Baltimore came down to something far more fundamental…. 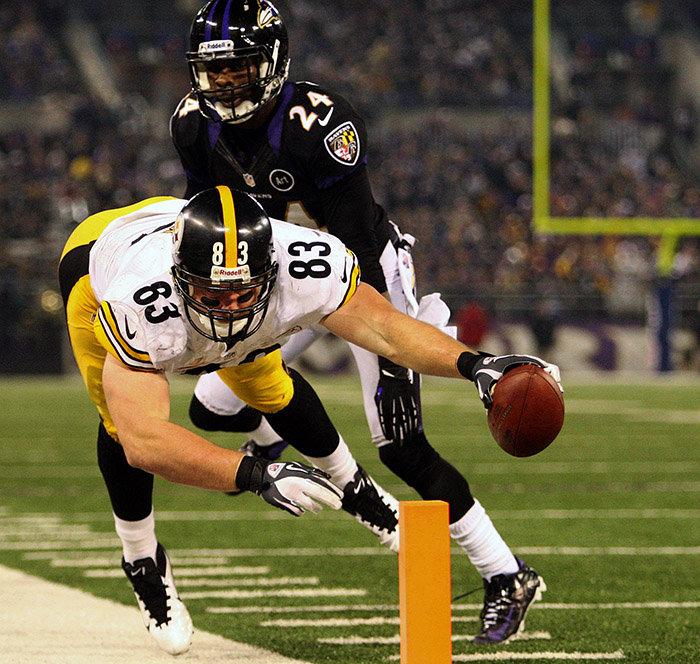 Heath Miller wills himself into the end zone in the Steelers 2012 upset of the Ravens, led by Charlie Batch. Photo Credit: Chris Knight, The Patriot-News

Steelers Validate Next Man Up Mantra

Let the record reflect that “The Standard is the Standard” in Pittsburgh, meaning that when one man goes down its expected that the next man stepping up delivers a winning performance.

With that said, the Steelers traveled to Baltimore down to their

If the Baltimore Ravens ever wanted to get the Pittsburgh Steelers on their knees, this would have been the game.

Yet the Steelers traveled to Baltimore with no intention of begging for mercy. They came to play and they played to win.

Like all good Steelers-Ravens match ups this one was fought in the trenches where men’s resolve was put to the test. Any fantasy’s about an easy victory for Baltimore were quickly quashed as the Steelers scored first, and held Baltimore to a field goal for the much of the first quarter.

Then the Steelers secondary struck, with something it rarely does when Ryan Clark intercepted an errant Joe Flacco pass.

Not only did the Steelers fail to capitalize, but…

The Steelers had to settle for a Shaun Suisham field goal to close the half, down 13-6…

…They were holding their own, but still lacked the necessary execution to put them over the top.

Tied the game to open the second half, as Charlie Batch connected with Health Miller for a 43 yard pass that brought the Steelers into the Red Zone. From there Jonathan Dwyer did his best Rainey imitation, cutting back when nothing was open in the middle and scampering sixteen yards into the end zone with Batch throwing the key block.

The Steelers defense held the Ravens, and with the ball in their hands the Steelers appeared to be hitting their stride. Emmanuel Sanders caught the ball at mid field and had an easy 30 plus yard gain if not a touchdown sight when he inexplicably fumbled.

Baltimore wasted no time, as Ray Rice smoked the Steelers defense for a 34 yard touchdown run that put the Ravens up 20-13.

Or so it seemed.

Prime Time Players Step up with the Game on the Line

Late in the 3rd quarter the Steelers looked poised to score having driven 49 yards on the strength of a 24 yard scamper by Isaac Redman  and a 23 yard reception by Heath Miller. But when Batch tried to connect with Miller again in the End Zone, Ed Reed was there, picking him off and returning the ball 27 yards to the Pittsburgh 34. Again, the Ravens had another chance to put the game away and the Steelers had another chance to fold.

Two plays later Harrsion came in behind Flacco for one of his patented strip sacks, Ziggy Hood recovered, and the Steelers were back in business.

Emmanuel Sanders atoned for his earlier mistake with a 17 yard reception that brought the Steelers to the 7, and on the next play Heath Miller stretch and struggled, and by the force of his will he touched the pylon on his way out of bounds.

The Steelers defense held the Ravens to 4 plays on the next drive.

Starting from his own 85 yards and just over 6 minutes stood between Charlie Batch and a chance to finish what is likely his final Steelers start with a victory.

Mike Tomlin played it cool, running the clock down to 3 seconds before sending his kick out.

Shaun Suisham delivered, knocking it in for 42 yards.

The Pittsburgh and Baltimore had fought another one for the ages.

No, this one came down to who wanted it more. And on this afternoon that team was the Pittsburgh Steelers.

One thought on “Charlie Batch Wins Final Start, Steelers Roll Ravens in Their Own Roost, 23-20”