All things must eventually draw to a close and in the case of this blog that includes our “Steelers Favorite Super Bowl Moment” poll.

The poll immediately went back up, and was kept after the disappointment of Super Bowl XLV as sort of a rallying cry.

However, in the fall of 2012 Google Blogger’s polling function ran into problems, and votes began disappearing from polls. While Blogger fixed it, the patch did not seem to apply to older polls, as this one had close to 1000 votes on it in October, and it closed at 800 and change.

So its time has come.

And what was the favorite Super Bowl moment of the Steel Curtain Rising faithful? See for yourself: 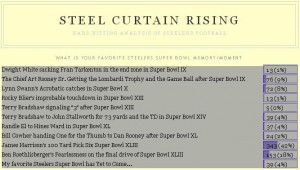 There’s little wonder why. |
James Harrison made one of the most dramatic game-changers in the history of the Super Bowl. Ben Roethlisberger’s final drive in Super Bowl XLIII comes in second on this list. The only other two moments to get any real “love” were the Lombardi Trophy presentation to Art Rooney Sr. following Super Bowl IX and Lynn Swann’s acrobatic catches in Super Bowl X.
Thanks to all who voted.