Mock me if you must! Snicker if you should! But don’t be so quick to doubt or discount the wisdom of La Toalla Terrible!

It was nigh two summers ago when all of Steelers Nation was awash in the glow of Willie Colon’s decision to give the Steelers a home town discount to the tune of 3 million dollars.

All was well, but what did we say? For those with short memories, La Toalla Terrible is only too happy to help you recall. We predicted nothing less than the Steelers would cut Willie Colon in two years: 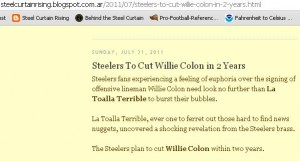 Called us “Party Poopers” did they. Negated as Naysayers needen’t we remind you…

Never one to shy away from twirling his own towel, La Toalla can’t help but say anticipating Colon’s cutting is only the latest in a streak of correct predictions.

In late January we said big news was about to break in Steelers Nation and low and behold Amos Jones heads to Pittsburgh West, Jack Bicknell joins to coach the offensive line, and Danny Smith arrives to act as special teams coach all in the space of two weeks!.

So, if news breaks that Bruce Arians is calling Ricky Turner to pick his brain, just remember who it was that told you that BA was licking his chops over the thought of running the wishbone….