Fortunately, Pittsburgh Steelers legend Jerome Bettis found his way into the Pro Football Hall of Fame in 2015. By all rights, Bettis should have been a first ballot Hall of Fame selection.

But Bettis undoubtedly suffered from the fact that fellow Pittsburgh Steeler Rod Woodson was selected the year before and at a time when Dermontti Dawson’s candidacy was gaining momentum.

Case in point, Steve Tasker, who was a special teams demon and little more gets serious consideration, yet L.C. Greenwood who had more sacks than Joe Greene remains ignored. 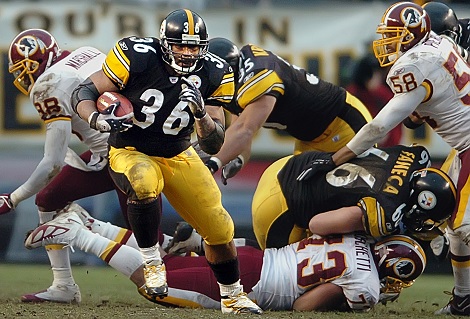 1 – No other NFL player carried the moniker “The Bus.” While he was nibble on his feet, Bettis was a bruiser, one rare running who dragged defenders with him.
2 – In two seasons following his 30th birthday, Bettis led the Steelers in rushing as a non-starter with 811 yards in 2003 and 941 yards in 2004.
3 –  Jerome Bettis’ 3.9 yards per carry average supposedly works against him. 41 more yards would bring Bettis average up to 4.0. What about all those 1 yard touchdown runs or 3rd and inches conversions? You want those or 41 more garbage yards?
4 – Jerome Bettis made four Pro Bowl appearances as a Steeler.
5 – QB’s started for the Steelers during his tenure. Of those, Jerome Bettis essentially carried, Mike Tomczak, Kordell Stewart, and Kent Graham and helped nursemaid Ben Roethlisberger
6 – Only six rushers are above him on the NFL’s all time list.
7 – Franco Harris, who is already in the Hall of Fame sits right below Bettis’ spot on the NFL’s All Time Rushing list at number 7. How can you out gain the author of the Immaculate Reception and not be in the Hall of Fame?
8 – Jerome Bettis posted eight 1000 yard plus season in his career, and was only a hair short in two others.
9 – There are NINE rushers who have fewer yards than Jerome Bettis who are already in the Hall of Fame – explain that one.
10 – Bettis played 15 or 16 games in 10 separate seasons. Durability is a hallmark of the great ones.
11 –

Jerome Bettis should be in the Hall of Fame this year. Let's do it Bus.

Need anyone say more?
12 – Bettis made appearances in a 12 playoff games before the Steelers “Took him home” to Super Bowl XL. All told Bettis playoff statistics look like this: 205 carries, 675 yards and 9 touchdowns, the latter number tying Bettis for 5th on the NFL’s all time list.
13 – The average NFL running back’s career is 2.57 years. Jerome Bettis played for 13 years, and in 11 or 12 of them he probably could have beaten out all but perhaps a half dozen of the running backs in the league for a starting job. Longevity is a hallmark of the greatest.
14 – Fourteen other NFL running backs have all rushed for 12,000 plus yards and are enshrined in Canton. Jerome Bettis is the lone exception. That must change.

The Pittsburgh Steelers are somewhat of a “conservative organization” when it comes to promoting their own players. (Contrast that with the feel-good stories Dallas’ PR team pushed on Tony Romo.)

Yet the Steelers organization has gotten behind the ball and is mounting a campaign to get Jerome Bettis over the top. Bill Cowher has spoken out. Dick Hoak has as well. So as Mike Tomlin and even Tom Donahoe, the man who authored the trade that brought Jerome Bettis to Pittsburgh, has offered his two cents.

But Pittsburgh Steelers President Art Rooney II said it the best: “He needs to be in there…. Its time.”