The Pittsburgh Steelers are about as conservative (in the non-political sense) of an organization as you can find. No cheerleaders. Decal on 1 side of the helmet. A single head coach press conference during the week.

The Pittsburgh Steelers have had a regular season contract negotiation black-out policy since 1993 that they never violate. So it appeared that the Steelers would take to the field vs. the Cleveland Browns without extending Cortez Allen’s contract.

This mark’s the second time in three years that the Steelers have had an 11th hour contract signing. In 2011, prior to the Debacle in Baltimore, Troy Polamalu signed his contract extension at the airport prior to departing for Charm City.

The Steelers drafted Cortez Allen in fourth round of the 2011 NFL Draft. Allen showed promise on special teams, and even worked into the team’s Dime packages, seeing significant playing time in the Steelers 2011 upset of the New England Patriots.

Allen was expected to push for a starting job in 2012, but was held off by Keenan Lewis, who budded into top NFL corner during the course of the season. However, injuries to Ike Taylor brought Allen into the starting lineup during the end of 2012, and in just 5 quarters of play, Allen forced 5 turnovers.

With Allen on the rise, and the Steelers mired in salary cap purgatory, Keenan Lewis walked as the Steelers opted instead to resign William Gay. Allen won the starting job in 2013, but was injured vs. Tennessee  in the opener (who wasn’t?), and didn’t regain his penchant for splash plays until the end of the year when an Allen pick six helped put the Steelers over the top vs. the Packers. 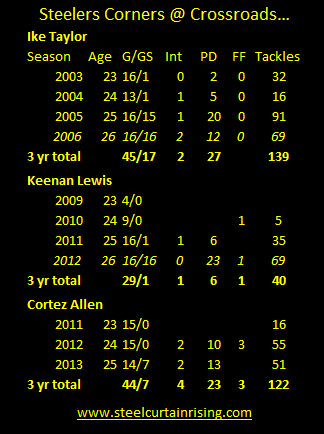 While Cortez Allen’s 2013 season was inconsistent, his 3 year totals see him out performing Lewis and are on par with Ike Taylor’s (note, the totals in the graphic above are for 3 years, not four.)

Prior to signing this contract, Allen was scheduled to be a free agent at the end of this season. As the off season began, Art Rooney II declared that the team would wait to extend quarterback Ben Roethlisberger‘s contract in favor of renewing other deals.