Its only week 3, and the Pittsburgh Steelers record is only 2-1. In 12 quarter the men in Black and Gold have looked strong in the first pair and last pair of quarters they’ve played, OK in their second to last quarter, and downright terrible in between.

Steelers Nation is rightly wondering whether the Steelers, coming off back-to-back 8-8 season, are going to up, down stay the same. 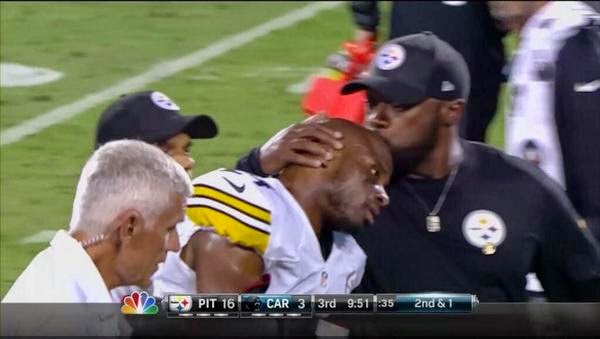 Already however, it is clear that the Steelers are showing some signs of continuity from 2013 – they’re proving Murphy’s Law, at least when it comes to injuries. To refresh everyone’s memory here’s how the old adage goes:

Anything that can go wrong, will go wrong, and at the worst possible moment.

Opening day 2013 might be old news, but the trend started there. You remember. The Steelers went into the season rolling the dice with paper thin depth at offensive line, inside linebacker and running back. Before the first 60 minutes expired, they’d lost Maurkice Pouncey, Larry Foote, and LaRod Stephens-Howling.

The Panthers victory was exhilarating to fans, but the Steelers lost Ryan Shazier and Jarvis Jones, two starters and two first round picks, and of course Ike Taylor.

While the Steelers have “depth” at cornerback, with Antwon Blake, Brice McCain and B.W. Webb, Blake and Webb are inexperienced and McCain has been a journeyman since breaking into the league in 2009 as a sixth round draft pick with the Houston Texans. In 5 years he’s made 10 starts.

But that’s a veritable feast compared to the Steelers situation at outside linebacker, where only Arthur Moats stands behind Jones and Jason Worilds. James Harrison is of course back after and 18 day retirement.

Harrison’s return was met by near euphoria in Steelers Nation and has a story book character to it. Yet reality has begun setting in, as Harrison admitted to feeling “horrible” after his first practice. This isn’t to say bringing back Harrison is a mistake.

The realities of the NFL’s salary cap mean that almost no team can be deep everywhere it needs to be. Every team makes calculated risks that the injury bug will not strike at an inopportune spot on the depth chart, the Steelers are no different.