For true Steelers junkies nothing beats training camp. Like the draft, training camp is about the future and the time when optimism more or less has free reign, save for serious injuries and gravely stunted player development. 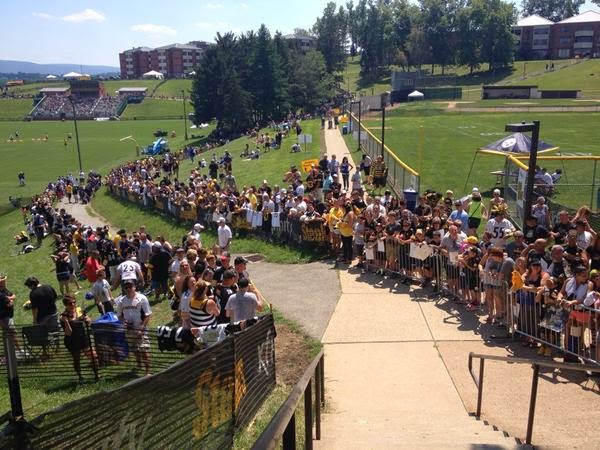 It’s also the best time for an institution like the Watch Tower, as the Steelers press has greater access to players, coaches and front office personnel than any time during the year. Alas, the Watch Tower was on vacation (ironically in the US) during training camp, and hence many opportunities to better understand what makes the Steelers media tick were lost.

Still, on the eve of the regular season, the Watch Tower still finds time to shine its light on Munchak, Blount and Bell, and Isaac Redman

What to Make of the Munchack Factor…?

As anyone with a pulse in Steelers Nation knows, the 2014 off season was the Pittsburgh Steelers most active. Yet for all of the free agent acquisitions, it has been said that Mike Tomlin’s decision to hire Mike Munchak has his offensive line coach could be the team’s biggest move.

But the Watch Tower singles out the Post-Gazette’s Ray Fittipaldo  for his article on Mike Munchack’s work with the offensive line. Not only does Fittipaldo confirm the story behind Jack Bicknell’s departure (as have others) he dives deep into the details of just exactly what it is that Munchack is doing in hopes of protecting Ben Roethlisberger better, and takes a look at his history of protecting quarterbacks.

While Fittipaldo’s version might not be truly BTSC like, lacking detailed stats and film clips, he helps make up for that in original reporting (full disclosure, I also write occasionally for BTSC.)

The nearly unending stream of off season feel good news about the Steelers was broken by the news that Le’Veon Bell and LeGarrette Blount had been arrested for marijuana possession and in Bell’s case, DWU.

But it is what happened next that got more interesting from a media analysis perspective. The NFL Network quickly reported that only Bell had been charged and Blount had not. Behind the Steel Curtain quickly confirmed the report, and some in the media followed that track, others continued to report that both men had been arrested.

As it turns out, the story was a little more complex. Ultimately both men are facing charges, but it is obvious that Blount was either never taken into custody and/or was allowed to leave earlier, as he made it to the team plane.

Either way, kudos to Neal Coolong for being the first member of the local Steelers press to confirm, or partially confirm, a crucial detail of a quickly emerging story.

Revisiting the Redman… Or Lack Thereof

While James Harrison legitimately owned the “retirement” news coverage, he’s not the only former Steelers practice squad turned Steelers Nation fan favorite to hang it up this off season.

Not that readers who depended on either the Pittsburgh Post-Gazette or the Tribune Review exclusively for their Steelers news would know that. Isaac Redman retired on August 22nd, and yours truly first saw a story, shared via Twitter, by the Baltimore Sun.

Behind the Steel Curtain’s Jeff Hartman had actually published a story before the Sun, making it the first Steelers-oriented publication to get the information out. Scott Brown of ESPN also wrote a very fitting tribute to the man who was perhaps the most popular backup running back in Steelers history.

One may ask, “So what? In age of social media who cares, if fans can find out through other channels?” From a strict news distribution perspective, the objection is valid. Which is problematic.

The Watch Tower wishes to be clear. While a one-time fan favorite and a competent backup, Redman in no way earned the type of place in Steelers rushing lore held by the likes of Dick Hoak, Franco Harris, Rocky Bleier, Merril Hoge, Jerome Bettis, or Willie Parker.

And this is just the beginning.

There was always a 2 +2 = 3 aspect to Redman’s decline. He started, struggled, was deactivated, and then the Steelers cut him. Then, in spite of his restricted free agent tender not being guaranteed, the Steelers had to re-work Ike Taylor’s contract because of Redman’s release. Why? Well, because Redman made a 1 time.  termination payment, a story that only Scott Brown reported at the time.

The question is why? At a minimum, Redman’s decision to exercise his 1 time termination payment suggests that he didn’t anticipate playing again anytime soon. Given his poor play in ’13 that makes sense. Given his 3 solid years of play prior to that it does not.

Steelers Nation now knows that Redman was injured, and was injured at the start of the Steelers season, almost certainly training camp. Yet, that avenue was never addressed or explored by the press, leaving one angle to the Steelers 0-4 start unexplained. Nor was the issue of a player hiding injury discussed.

Truthfully, when you couple this lapse in coverage with lapses like the failure to report Doug Legursky’s departure, it would seem that the editors of Pittsburgh Post-Gazette and Pittsburgh Tribune Review need to soul searching as to just what their mission is in terms of Steelers coverage.