Former Pittsburgh Steelers head coach Chuck Noll’s death in June left the scribes of Steelers Nation with a daunting task. Namely, how to sum up the accomplishments of a man who accomplished so much, and said so little. 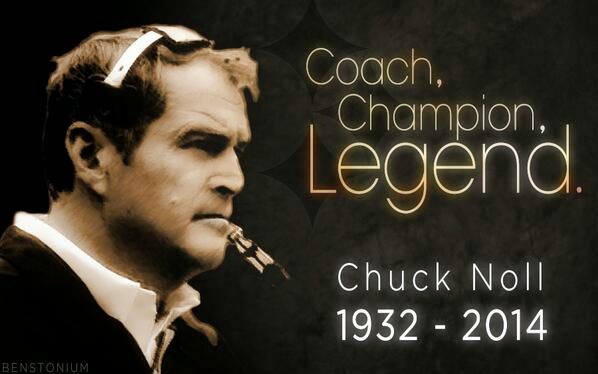 As Steelers Nation prepares to celebrate Chuck Noll Day as the Steelers open the 2014 NFL season vs. the Cleveland Browns, Noll’s former team, the Watch Tower takes a look at the coverage of Noll’s life and times.

Breaking the Story, Kudos to the Tribune Review

Chuck Noll died on a Friday night, a terrible time for news coverage, even in the age of the 24 hour news cycle. The arrival of Twitter has made the art of “Breaking a story” largely an academic question left to journalism geeks. Nonetheless, the Pittsburgh Tribune Review draws kudos for getting the story out first.

The Tribune Review immediately published two stories by editor Jerry DiPaolia, someone who hasn’t written on the Steelers much lately. Still, both of his stories were on the mark, and they were clearly written. The Post-Gazette’s Ed Bouchette got something up there quickly as well, but it wasn’t until the next day the Gerry Dulac’s official obituary went up.

However, for 24 hours, the Dulac obituary was all the Post-Gazette had. In a word, the Watch Tower was ready to pounce. By the next day, the Post-Gazette publish a storm of excellent stories, including one for Dan Rooney which must be regarded as a coup.

Behind the Steel Curtain Editor, (full disclosure, the yours truly also writes for BTSC) explained the rationale in the terms which his site approached it.  A figure as monumental as Noll deserves a pause before rushing to publication.

Noll Finally Gets His Due in Death

When discussions of who the greatest coach in history is, Chuck Noll’s name rarely got mentioned while he was alive. And Noll undoubtedly loved it that way. Those honors typically go to Bill Walsh, Don Shula, Vince Lombardi, Bill Parcells, and/or Paul Brown.

But as fitting as that is, Noll the man got equal coverage. Ivan Cole of Behind the Steel Curtain talked about Noll’s commitment to merit and equality, without regard to race. BTSC’s Jack Finn similarly argued that Noll’s greatest contributions were not his trophies, but rather the integrity of his identity and purpose. Neal Coolong of BTSC, in one of his best pieces ever (which is saying something) honed in on the fact that no one else has approached 4 championships in six years.

Rocky Bleier wrote a moving tribute on Sports Illustrated. Dejan Kovacevic, at the time still with the Tribune Review discussed the vital contribution to civic pride delivered by Noll’s Steelers. (A day late and a dollar short, Ron Cook wrote a similar story.) The Post-Gazette’s Gene Collier employed his dry wit and his understated, yet penetrating insight to produce an excellent piece.

Steelers.com went all in on the coverage, as would be expected and even offered gems from Hines Ward and Rod Woodson, two players not often associated with Noll.

BTSC and Scott Brown Get Kudos for Best Noll Coverage

Journalism serves many functions, and its basic function when someone passes away is to tell his or her story and covey  their contributions.  As the above sampling reveals (and this is only a sampling) many of Steelers Nation’s best scribes did an excellent job of doing just that.

The prize for doing that in the case of Noll’s death was clearly won by ESPN’s Scott Brown and Behind the Steel Curtain’s Homer J. aka Mike Silversteen.

One of the ways in which Scott Brown approached Noll’s death was to get on the phone with his former players, and share their thoughts. Brown deserves credit for doing it the old fashioned way, in actual conversations with sources as opposed ot simply lifting comments off of Steelers.com.

He also talked to Bill Cowher, and in the process got a priceless piece of information about a plane ride between Noll and Cowher which occurred shortly after Cowher had been hired.

While the conversation Brown reports reveals nothing earth shaking, it’s an amazing look at the inner workers of the Steelers circa 1993. When Noll retired he held the title of “Administration Advisor” but that was always seen as simply ceremonial title. And, by and large part it was. But Brown’s reporting shows that Noll still had enough of a connection to the team that he’d ferry his successor on scouting missions.

While Brown’s revelation is important, it nonetheless sits in second fiddle to the journalistic coup found in Behind the Steel Curtain’s Renegade preseason special.

BTSC’s Homer J. is a former journalist from ABC Radio who was present at the Immaculate Reception and clearly maintains sources within the Steelers organization. The Watch Tower has already praised his ability to deliver details on just how and why Mike Tomlin dazzled Dan and Art Rooney during the interview process.

It had been known for years that Noll’s health was failing, and that he was either suffering from Alzheimer’s or Alzheimer’s like symptoms in addition to heart and back problems. The Steelers, their former players, and Noll’s family protected his privacy with a shroud of secrecy.

Moreover, to his credit, he delivers those details in a dignified way, that does The Emperor justice. If you haven’t read Homer’s piece yet, take the time to click here and do so now. You’ll be glad you did.