The Pittsburgh Steelers traveled to Cleveland and for the first time in half a generation their historic rival Browns were the favorites. Ever since LeBron James decision to return home, the press has wanted to write the story of a sports-fueled rust belt revival at the mistake by the Lake.

There’s really no way to sugar coat this, because if anything, the score of 31 to 10 makes it look closer than it really was. No folks, that’s not a misprint.

Steelers Strong, for a Quarter….

After the Jacksonville win, Jim Wexell observed that the Steelers appeared to be playing tight. And the razor thin margin of victory over one of the league’s bottom feeders vindicates him. The Steelers he argued, need the win to boost their confidence as much as anything else.

All week leading to the Browns game, the Steelers said and presumably did all of the right things. The Steelers wouldn’t be surprised by Cleveland’s no-huddle. The Steelers run defense would be ready. This was going to be a tough game. 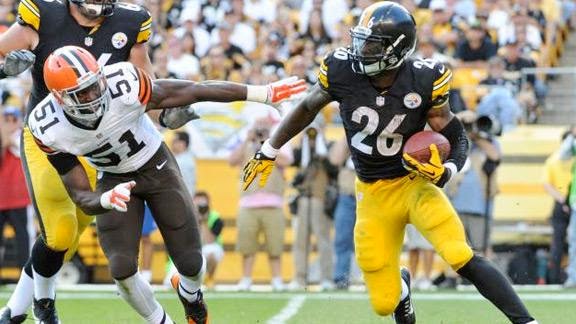 And for one quarter, the lived up to their words.

When the first quarter ended, Cameron Heyward was putting Brian Hoyer on his back, Lawrence Timmons was making tackles behind the line of scrimmage, and the Steelers were running the ball at will….

A week ago the Steelers seemed intent on passing at all costs inside the 20. In Cleveland Todd Haley channeled his inner Chuck Noll, and attempted to ram it in there.

Still, 3 points is better than no points, as the Steelers themselves would so eloquently demonstrate a short while later. Indeed, the Steelers defense forced a 3 and out and on their next possession the Steelers marched from the 50 to the 17 in workman like fashion. On third a 3, Ben Roethlisberger tried to hit Markus Wheaton, but Wheaton couldn’t hold on to the ball. Then things fell apart. Literally.

Cleveland took over on downs. They also took over complete control of the game with 13:36 to play.

Sometimes self confidence can be a fragile thing. With the Steelers, that certainly seems to be the case. Whatever confidence, and the extra focus that brings, the Steelers earned with a win in Jacksonville, was lost with the bobbled snap.

Cleveland owned the next three quarters of football, lock stock and barrel.

How bad was it? Consider:

Fans who’ve been clamoring for the Steelers to lean more on their running game, got their wish. Le’Veon Bell  and LeGarrette Blount both got plenty of touches and looked strong doing it. Dri Archer looked strong as well.

But it was all for naught, as Ben Roethlisberger found zero rhythm with any receiver not named Antonio Brown. Markus Wheaton had 11 targets but made four catches. Lance Moore, who has complained about lack of carries, missed throws he should have had. Justin Brown made some nice throws, but missed some others.

The Steelers defense deserves, perhaps, some credit for limiting the Browns to 10 points in the second half. And had the Steelers offense done its part in the first half, playing down 21 to 14 and that might have been enough.

Nor did the Steelers get any help form special teams, of any form or fashion. Cleveland, in contrast, managed to down punts deep in Pittsburgh territory with regularity.

The Steelers truly did fail in all three phases of the game.

The road for the Steelers only gets tougher, as the Steelers next will face the Texans, the Colts, and the Ravens. The Steelers thus far, with the exception of the Carolina game, have played below where their talent should take them.

Victory in the next three weeks will require the opposite.