The 3-3 Pittsburgh Steelers hosted the 3-3 Houston Texans at Heinz Field last night on Monday Night Football in a game that Steelers Nation had hoped would provide a little clarity to what has been a topsy-turvy season.

Instead, the Steelers found themselves out scored 23 to 9 during 58:47 minutes of the game, while outscoring the Texans 21-0 during the intervening 1:13.

The win improved he Steelers to 4-3, but the importance boosting the Steelers “W” tally by one will pale  in comparison if Mike Tomlin ensures that this win boosts the team’s confidence. 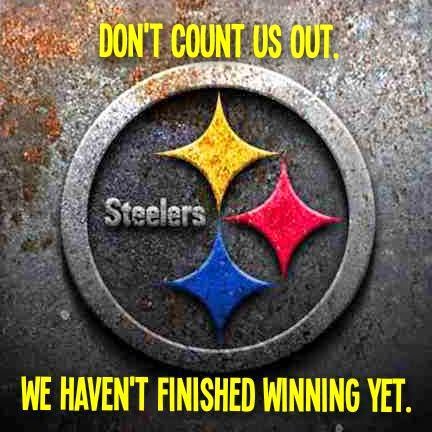 A Question of Confidence

Confidence. Here’s how Webster’s defines the word:  “A feeling or belief that you can do something well or succeed at something.”

Confidence can be a curious concept. Sometimes, people come to it naturally. In 1969 a young rookie lined up for his first foray into Chuck Noll’s dreaded Oklahoma Drill with a chip on his shoulder. A few minutes later the entire offensive line lay discarded to the side, while the young rookie remained standing, hungry for more.

While his example inspires, Greene is the exception and not the rule.

Confidence is something which most often must be built, particularly on the team level, and especially in football the ultimate team sport. In football, confidence can’t completely compensate for a lack of ability, but the right dose of confidence can propel a team far beyond the limits of how far its talent is supposed to take it. (See the 1989 Steelers.)

On the flip side, the absence of confidence will utterly devastate a football team. (See Steelers secondary’s poor play during 2009 losing streak.)

Behind the Steel Curtain editor Neal Coolong offered this takeaway from the Steelers loss to the Browns:

Cam Heyward and Sean Spence were dominant in this game early. The defense, as we’ve probably forgotten thanks in part to a complete meltdown in the second quarter, was playing very well early. Six plays run for -8 yards, and a defensive front-seven that looked powerful against a good offensive line. It seemed like the big play to Jordan Cameron really shook the defense up. They didn’t play with the same sense of confidence after that.

Coolong’s right. While talent is an issue (see Cam Thomas getting blocked to kingdom come here), After the field goal fiasco, the Steelers played as they were the Little Engine the Couldn’t.

Before the Frantic 73 Seconds…

Steelers began playing the Texans as the same confidence-challenged unit that struggled for 3 quarters against the Browns. Arian Foster had 99 yards in the blink of an eye. Brad Wing was getting a work out. Truth be told, the Steelers were lucky to only be down 7 at the end of the first quarter. It looked to be a long night.

Truthfully, that’s not quite what happened.

First, the defense went into “Bend but don’t break” mold, and forced the Texans to settle for two field goals. Second, Ben Roethlisberger began to get into a bit of a groove. Throwing from his own 14 he hit Le’Veon Bell who exploded for 43 yards. The Steelers couldn’t convert this into a touchdown, but they got on the board 3 three.

Next, the defense did its part, as Cameron Heyward held Roster for a 2 yard loss and Lawrence Timmons sacked Ryan Fitzpatrick. The two minute warning stuck, and Houston had to punt…. 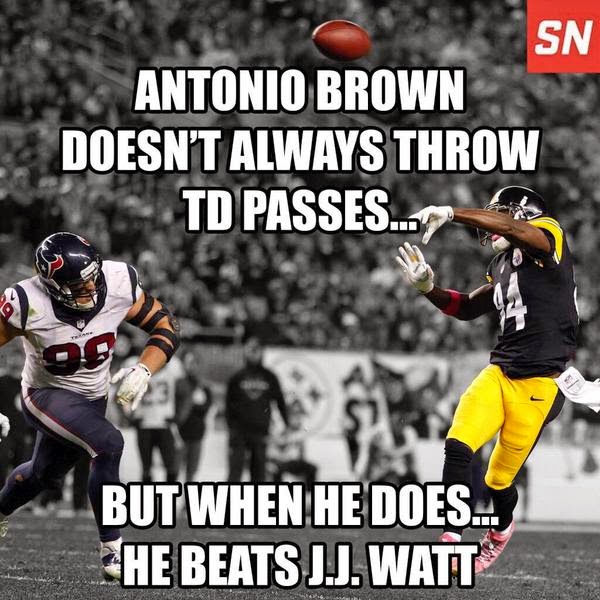 Regardless of how the 2014 turns out, the final 1:22 of the second quarter vs. Houston will go down as one of the most eventful 82 second bursts in Steelers history.
And so it should.

Teams do not score 21 points in the space of 73 seconds. Forget about football teams – basketball teams are not supposed to score so quickly.  But it happened.

And For a second straight week, Brett Keisel made a play that 36 year old defensive lineman are not “supposed to make.”

That’s 1 week’s worth of highlights in less that 2 minutes.

…After  the 73 Frantic Seconds

The poetic way to spin the story would be to say that after going on its scoring binge, the Steelers methodically closed out the game, and that after the 21 barrage the final result was never in doubt.

The truth is the remainder of the game offered both reasons for Steelers fans to hope and worry.
In two more red zone opportunities the Steelers settled for two more field goals
The outcome was in doubt late in the game

But to put that into context, one must also accept that Antonio Brown was robbed of a touchdown when his feet were clearly in bounds. And the Steelers defense did end one Texan possession when Michael Mitchell forced a fumble, a welcome sight for a turnover starved defense.

Remember, Houston’s rally was aided by a failed end zone shot when a run or a high percentage short pass could have kept the clock running and by a foolish roughing the passer call by James Harrison.

Neither factor serves as an excuse, but both issues are correctable.

By the time those teams arrive at Heinz Field, the ink on that impressive stat will have long since dried.

You can’t catch lighting in a bottle. Instead, the key to sustaining the win over the Texans lies in looking at what made it possible: Confidence.

Ultimately, it’s about the confidence it takes to look at being down by 2 scores early and believing – knowing you fight back if you can remain focused.

If Mike Tomlin can use this game to coax this kind of confidence out of his young team, then the importance of this victory can grow beyond a single “W.”