Taken from the grade book of a teacher who has become more than a little gun shy of rewarding the upsides of a very sporadic student, here is the Pittsburgh Steelers Report Card for the victory over the Houston Texans at Heinz Field.

Quarterback
Statistically speaking, Ben Roethlisberger had a strong night, with two touchdowns, no interceptions, and a solid 265 yards passing. While those numbers are solid, Roethlisberger again put the ball on the ground, and missed on a key throw when the team was trying to kill the clock. These types of mistakes are becoming too common. Grade:  B

Running Backs
For two straight years, no running backs were selected in the NFL Draft. If Le’Veon Bell and DeMarco Murray continue to produce at the level they’re producing that will change. Bell only had 57 yard rushing, but two long receptions by him sparked the Steelers first two scores. LeGarrette Blount only managed 9 yards on 7 carries, but made a critical grab. Dri Archer had one nice run and one poor run. Grade:  A

Tight Ends
Heath Miller only had one catch but it was good for 13 yards and effectively positioned the Steelers for their first score. Miller got no more catches or targets, however he was held back to block far more frequently than in the past. Grade:  B

Wide Receivers
Antonio Brown is making his case as one of the NFL’s best receivers, with another 9 catch performance which included some tough ones. Markus Wheaton had two targets and no catches. Martavis Bryant made good in the end zone on his first NFL catch. Darrius Heyward-Bey had one catch for 17 yards and Lance Moore had two catches including a touchdown. Overall a good night for the receivers, but they’re still somewhat out of sync with their quarterback. Grade: B-

Offensive Line
Mike Adams stepped in for concussed Marcus Gilbert, and did an admirable job. Overall the line performed well and contained JJ Watt. Run blocking could have been more consistent. Grade B- 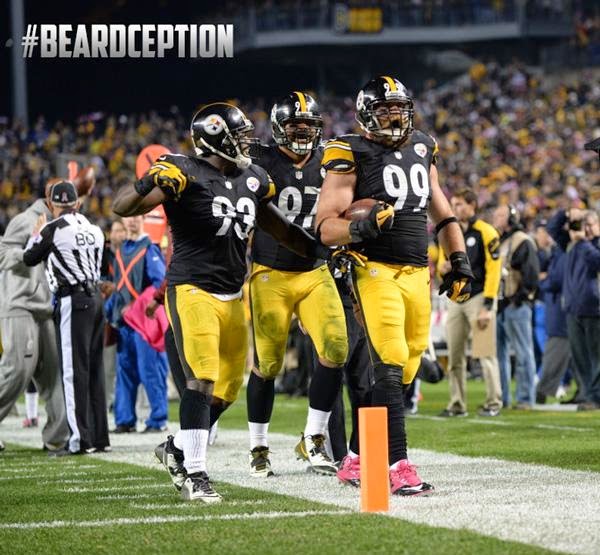 This unit got a new look, as Stephon Tuitt got his first start and Daniel McCullers saw his first NFL action. McCullers looked good in his playing time, as did Tuitt. Cameron Heyward helped set up the Steelers first touchdown by stopping Arian Foster. The real hero of the unit was Brett Keisel, who batted away two passes and took caught the deflection to set up the Steelers 3rd TD in 0:73 seconds. The line struggled in the first quarter, but bounced back quite well. Grade:  B

Linebackers
Lawrence Timmons was everywhere, getting one sack making two tackles for a loss, and laying in another quarterback hit. Jason Worilds forced a fumble and had a strong night. Arthur Moats got in a quarterback pressure while James Harrison got in 3, although Harrison’s roughing the passer penalty helped Houston make a run at coming back in the end. Grade:  B

Secondary
For the second straight week, Michael Mitchell forced a fumble and appears to be settling in on the defense. Brice McCain started at corner, and his name was not heard much during the night – which is good in this case. William Gay was solid. Cortez Allen, however struggled at times. Troy Polamalu recovered a fumble but gave Houston a free timeout with his goal line leap. Grade B-

Special Teams
Shaun Suisham was perfect on the night place kicking and his kickoffs had good depth. The Steelers got nothing from their kick return game, although Brown’s punt return helped spark the Steelers first touchdown. Brad Wing had a solid night punting, and for the first time all year, managed to pin Houston down deep. The kick return coverage team was excellent. The unit did give up a fake punt. The final on-sides kick was touch and go, although there is an “X-Factor” that goes with on sides kicks.  Grade:  B

Coaching
Let’s be honest, the Steelers looked dazed and confused at the beginning of the game. During the first quarter it looked like the Steelers would not only lose their first home at on Monday Night Football since 1991, it had the makings of a blow out.

But to Mike Tomlin’s credit, the Steelers did not flinch. First the defense buckled down, then the offense got on the board in workman like fashion, and then it exploded.

Dick LeBeau’s defense is not going to be a Steelers-shut down unit. He sacks, turnovers and, at the end of the talent, to do that. But perhaps it is capable of growing into a bend-but-don’t break group, which isn’t so bad.

While Todd Haley’s offense was “above the line” it still has issues, as suggested by its 5-14 effort on third downs and inability to put the game completely out of reach, either by scoring, or by burning out the clock. The reverse turned pass by Brown worked, but was touch and go. The Steelers can’t afford such risks vs. the Colts. Grade:  C+

Unsung Hero Award
The Steelers sputtered badly to start the game, but the defense quickly bore down. The Texans efforts to rally at the beginning of the second half were halted in large part but a couple of big stops from a linebacker who might be making his last start. If it is, he redeemed some of his early missteps and more with those tops and a fumble recovery, and for that Sean Spence is the Unsung Hero of the win over the Texans.