When Art Rooney II called out Pittsburgh’s offense for the need to run better after the Steelers 2009 season, he explained that the running game was the foundation of the franchise.

The Steelers President was clear, he wasn’t calling for a more run oriented offense or for a re-calibration in the run-pass ratio, but only indicating that the team needed to be able to run when the situational football demanded it. 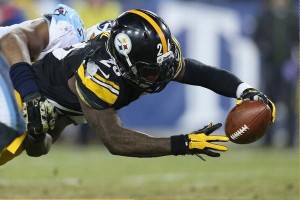 Le’Veon Bell – Reason for Steelers Nation to Give Thanks

That makes this Steelers Thanksgiving moment so much sweeter.

Those are Le’Veon Bell’s totals from the Steelers 2014 victory over the Titans. No, those are not his totals from the entire game, but rather from the last 18 minutes and 42 seconds, following the Titans final score which put them up 24-13.

When a team is down by 11 points with just over a quarter to go, the traditional M.O. is to air the ball out. But the Steelers had tried that. Ben Roethlisberger was having an off night, and was out of sync with receivers not named Antonio Brown or Heath Miller. Still, this was hardly a conventional situation where a team “needed to be able to run the ball.”

Prior to the Titans game, Le’Veon Bell had proven he was a good back and offered flashes of something more. But vs. the Titans Bell did what great backs do – he took over the game, and he did while playing from behind.

Yes, the likes of Walter Abercrombie or Sidney Thornton would probably look good running against the Titans run defense. But that doesn’t diminish Bell’s accomplishments. He ran the ball on the Titans when they knew he was going to run, and he looked to get stronger with each carry, another sign of a great back.

While we’re happy to recognize bell on this day of thanks, it’s important to state the obvious.

With that said, Steel Curtain Rising certainly hopes that all of you have reasons to give thanks that go beyond the gridiron, and that each and everyone of you is celebrating Thanksgiving safely and comfortably with friends and family whether you’re on the road or staying home.

2 thoughts on “Le’Veon Bell, Reason for Steelers-Nation to Give Thanks”