Mike Tomlin teams are known to come out of bye weeks strong (lone loss coming in ’07 vs. Denver), and the Steelers are coming off of their their late November bye week at full health.

At his weekly press conference, Tomlin confirmed that Steve McLendon, Troy Polamalu, Ike Taylor, Shamarko Thomas, Ross Ventrone and Ryan Shaizer had returned to practice. Jarvis Jones also resumed practicing with the team, although he remains in injured reserve. The only injury the Steelers have is Cortez Allen, who is nursing a broken thumb.

2014 has been kind to the Steelers (knock on wood) on the injury front. Nonetheless, the defensive unit that opened the season against Cleveland has only played 10 quarters together all season. Clearly the defense will benefit from Polamalu and Taylor’s return. After that, things get interesting. 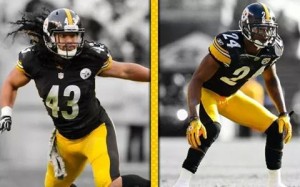 Behind the Steel Curtain editor Neal Coolong has declared that the return of so many players means it is time for the Steelers investment in defense to show some dividends (full disclosure, I also write for BTSC). His sentiment is both logical and widely shared.

As Steel Curtain Rising has noted before, injuries the Thomas, Jones and Shazier have robbed these young players of precious developmental time. The coaches do need to find a way to work them onto the field in “some form or fashion” as Tomlin would likely say.

Tomlin himself illustrated the issue with respect to Shazier:

He is not in a similar circumstance like Troy and Ike. Troy and Ike have a decade of experience of playing in our defensive system. … We will watch not only Ryan’s level of participation but the quality of his execution. He has missed some time. He is a young guy. He has to prove to us that he can execute in great detail.

As important as it is to develop talent, Pittsburgh “dropped” in the AFC North without even playing a game. The Steelers need to play their best football now, because it’s possible that even a 10-6 finish won’t be enough to punch a playoff ticket in this year’s AFC.

Sean Spence and Vince Williams have been solid, but not spectacular in Shazier’s absence. Neither has his athletic pedigree, but both have far more game experience than Shazier.

The Steelers won’t likely make any decision on Jarvis Jones this week, but any move to activate him would also force a roster move, in addition to forcing the team to juggle between getting Jones the snaps he needs, and taking James Harrison off of the field.

Let’s be clear. Having too many guys health in late November in the NFL is a “luxury” that any NFL coach or GM would die to have. Trust me, Mike Tomlin would have been elated to have deal with such a “problem” in 2013, 2012 or even 2011.

But that still doesn’t mean that Mike Tomlin and Dick LeBeau don’t have some tough choices to make.