The Pittsburgh Steelers waltzed into Tennessee fighting a tendency to trip over trap games. They started strong, stumbled badly only to surge past the Titans on the shoulders of rookie Le’Veon Bell. 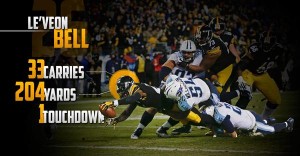 In between, former Steelers assistants of Ken Whisenhunt and Ray Horton managed to confound their former employer for much of the night, while Nate Washington painfully validated Kevin Colbert’s faith in him.

But at the end of the day, the game came down to Mike Tomlin confronting a familiar demon by falling back on the franchise’s foundation – rushing the ball – in a situation that screamed for him to do the opposite.

Following impressive wins over The Texans, Colts, and  Ravens, Pittsburgh promptly put the “Sink to the level of competition” monkey back on its back with a lack luster loss to the 1-8 New York Jets.

Early on in the game, the Steelers looked like they might actually finally mean it. Markus Wheaton returned the opening kickoff for 32 yards, and Le’Veon Bell accounted for all 37 of the team’s yards drive the ensuing kickoff. Things stalled there, but Shaun Suisham’s 49 yard field goal put the Steelers up 3-0.

On the very next play from scrimmage, William Gay struck on the game’s opening pass, returning a Zach Mettenberger. With less than 5 minutes elapsed, the Steelers were up 10 to 0, and it looked like the fireworks were starting as Dick LeBeau’s defense was beginning to work on another rookie quarterback.

Credit Ken Wisenhunt for sold game planning and excellent play calling. Credit the Titan’s offensive line for protecting their charge. And ultimately, credit the rookie Mettengerger. He shook off the pick six and only needed 5 plays to cut Pittsburgh’s lead to 3.

The Steelers offense responded by moving 85 yards down the field in workman like fashsion and burning up 7 minutes of the clock in the process.

The Steelers kicked for 3 to close the 1st quarter, and it was the last time they’d see the end zone for the next 30 minutes. The same could not be said of the Titans…

The Student Confronts the Master

Since taking the Cardinals defensive coordinator job in 2010, Horton had faced the Steelers 3 times resulting in combined Pittsburgh wins of 72-38, 1040 total yards for the Steelers and close to a 33:00 minute advantage in time of possession.

In Tennessee on Monday night, Ray Horton’s defense authored a very, very different story. Horton launched wave after wave of all out blitzes on Ben Roethlisberger the likes of which Pittsburgh hasn’t seen since the heyday of Ray Lewis, Bart Scott and Terrell Suggs.

And for two quarters, Horton’s defense rendered the Steelers offense utterly hapless, looking every bit like the team that struggled to score vs. Tampa, Jacksonville, and Cleveland.

On the flip side, Dick LeBeau’s unit failed to pressure the passer, struggled to make tackles at times, and was caught asleep at the switch by former Steelers undrafted rookie free agent Nate Washington. When the Titans went up 24-13 late in the third quarter, the outcome appeared to be all but decided….

…Everyone knows that when you’re done 11 points with less than 20 minutes remaining, it’s time to take the wrappers off your passing game. Right? That’s conventional wisdom in the NFL, and Mike Tomlin has generally followed that.

It took 3 quarters, but he and Todd Haley finally made and adjustment to combat Tennessee’s blitz – Roethlisberger would call two plays in the huddle, and if the Titan’s showed blitz, he’d make a change. Over and over again, Roethlisberger signaled change at the line of scrimmage, and more often than not the changed involved Le’Veon Bell.

From the time the Steelers took over with 3:42 left in the 3rd quarter, Le’Veon Bell rushed 15 times for 121 yards, averaging 7.5 yards a carry, and burned off six runs of 5 yards or more during the Steelers final drive, when the Titans knew he was going to run. In doing so, he accomplished something that neither Franco Harris, nor Jerome Bettis, nor Merril Hoge ever did in rushing for 204 yards.

Mike Tomlin teams have legitmate issues with trap games that stretch back to his first year. For a while it looked like the Steelers would fall prey again.

That’s not a bad way to begin your bye week.

One thought on “Steelers Start Strong, Stumble, then SURGE Past Titans with Le’Veon Bell”