The schizophrenic Pittsburgh Steelers marched into Cincinnati’s Paul Brown Stadium with a 7-5 record and a desperate need to win to keep their playoff hopes alive. If before the game, someone had told you that…

You’d almost certainly conclude that the Steelers laid yet another egg.

And you’d have been wrong.

While the Steelers proved beyond a shadow of a doubt that their secondary is decidedly not their strong suit this year, they were resilient enough to beat the Bengals 42 to 21 and jut might have uncovered the formula for winning with this edition of the Black and Gold. 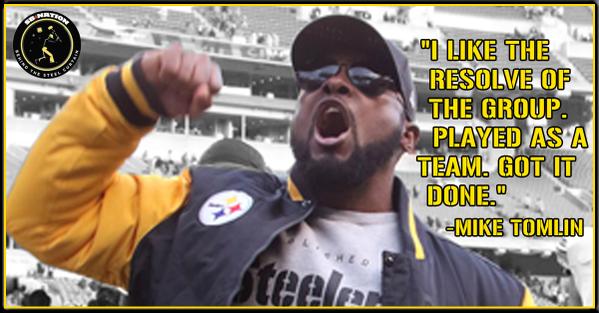 Pittsburgh head coach Mike Tomlin can, will and should be criticized for the Steelers lackluster performances against the Buccaneers, Jets, and Saints. Tomlin’s troubles with the trap games date back to his first year as head coach and are not something to minimize.

Whenever his teams do slip and fall down, they never yet have failed to get back up and rejoin the fight. It happened his first playoff game vs. the Jaguars. It happened in Super Bowl XLIII. It happened last year after they started 0-4 and then got creamed by the Patriots 55-33 to fall to 2-6.

While you can’t say that Cincinnati had Pittsburgh “On the ropes” at any point but the truth was the first three quarters evolved in typical fashion for the Steelers.

Sure, the Steelers forced a punt to begin the first half and scored a touchdown of their own. But Cincinnati struck back, and while Andy Dalton’s 81 yard hook up with AJ Green to end the 3rd quarter only put the Bengals up 21 to 17, it still carried an ominous tone.

But the Steelers didn’t let the Bengals force them into Bashful mode. Le’Veon bell took the Steelers next play form scrimmage for 53 yards. Of course the Steeler’s didn’t get much after that and had to settle for 3 were still 1 point behind.

The “secret” ingredient was yet to come.

It doesn’t and shouldn’t take the football equivalent to figure this out. In fact, it’s almost tautological. Pittsburgh Post-Gazette sports editor Jerry Micco said it best on PG Sports Now, when he observed that the Steelers wins all happened when Ben Roethlisberger was playing well and the defense was getting turnovers.

Yet they have been paydirt all year long for the Steelers, whether it’s been Jarvis Jones forced fumble vs. Carolin, William Gay’s pick sixes vs. Indy and Tennessee, Brett Keisel’s deflected pass/interception vs. Houston, or Brice McCain’s pick vs. Baltimore.

And so it was with Arthur Moats fumble recovery of a failed exchange between Andy Dalton and Jeremy Hill. The Steelers wasted little time capitalizing on that play, as Le’Veon Bell charged into the end zone 4 plays later and then Ben Roethlisberger and Heath Miller made the two point conversion to give the Steelers a full touchdown lead.

Moats fumble recovery jarred the door loose, the Steelers offensive line bulldozed it open, and the entire Pittsburgh offense exploded through it, as Bell’s touchdown was only the warm up act.

Fans have often criticized Todd Haley (and his predecessor Bruce Arians) for being a little too trigger happy when it comes to going for the knock out punch. While sometimes those criticisms have been legit, Roethlisberger’s 94 yard hook up with Martavis Bryant shows why they’re so tempting.

…Unless perhaps you count running back going 22 yards down the sideline for a touchdown against a defense that knows the run is coming. Because that is of course what Le’Veon Bell did, and in the process became the first player since Walter Payton to rack up 200 yards for scrimmage in 3 consecutive games.

The resilience the Steelers showed in winning on the road in Cincinnati was as impressive as was the final score. Pittsburgh needed this win quite frankly just to keep their playoff hopes alive. Dan Fouts went a step farther and labled it a “Statement win.”

The Steelers have generally done well against the stronger teams on their schedule this year. It’s their inability to take care of business against teams with losing records that has bedeviled them.