The Killer Bees led the Steelers to a total team victory over the Falcons, raising Pittsburgh’s record to 9-5, but the Watch Tower focus today is the coverage the Steelers press corps. is giving to Le’Veon Bell and Ryan Shazier. 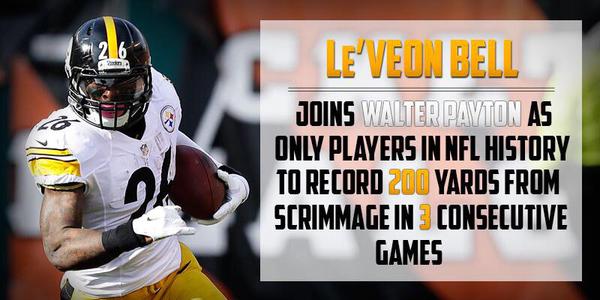 Le’Veon puts himself in some elite company…

Even if the Steelers end up losing their final 3 games this season to finish 8-8, one unequivocal positive to this campaign will be the emergence of Le’Veon Bell as the Steelers first legitimate feature back since Rashard Mendenhall’s ACL injury to close the 2011 season.

So popular in productive is number 26 that it is easy to forget that it wasn’t always so. Not by a long shot. Bell did arrive in Pittsburgh with a lot of fanfare, but his Lisfranc injury delayed his debut on the field and his somersault end zone flip in the Steelers London Loss seemed to sum up everything that was wrong with the then 0-4 club.

Bell looked strong through the tackles at times, but in 12 games during his rookie season he had 5 games where his rushing average was below 3 yards. He didn’t break the 100 yard mark until the 15th game of the season. Green Bay’s Eddie Lacy, whom the Steelers passed on, out performed him.

Credit Jim Wexell for stepping out early and raising his hand, and saying, “Hold on folks, let’s not give up on this young rookie yet.” After Bell turned in a 34 yard 16 carry performance in the 2013 Steelers win vs. the Jets, Wexell took to Steel City Insider to publish a column titled “Give Bell a Chance.”

Not only were Wexell’s words warrented, but the context in which he chose to frame his arguments all the more ironic 14 months later:

Le’Veon Bell’s no Walter Payton. We can all agree on that.

But with so many reporters and fans questioning Bell’s high rookie expectations as the Steelers’ next “bell cow” running back, perhaps it’s time to take a look at how the late, great Payton fared as a rookie:
* In his first two games, Payton carried 29 times for 95 yards.
* In his first seven games, Payton averaged 3.1 yards per carry.
* Payton came on late to average 3.5 ypc. that season; his team averaged 3.7.
* Payton’s team started 1-4, finished 4-10, and the offensive line was so bad the Bears drafted there in the first rounds of the next two drafts.

If not for the next 12 years of Payton’s Hall of Fame career, Bell’s name could be substituted in the above notes. [Emphasis added]

Wexell didn’t simply make the Bell-Payton analogy once and let it slip away into oblivion. During the course of the 2013 season, charted Bell’s game-by-game production against Walter Payton’s rookie season, just to keep things in context:

During the Steelers victory over the Bengals, Bell became the first back since 1977 to amass over 200 yards from scrimmage in 3 straight games. The back who did it in ’77? Walter Payton of course.

While we’re doling out kudos for those who believed in Bell early, its also time to throw in a kind word for Ed Bouchette (and eat a little crow in the process.) Before the Steelers 2013 preseason opener, Bouchette compared Bell to Franco Harris and declared that a new era could be beginning for the Steelers.

While its certainly true that Bell as a long, long way to go to put himself in the same category as Franco Harris and Walter Payton, his achievements thus far show that he’s got a shot of getting (if, God willing, he stays healthy.)

So as it turns out, Bouchette was on to something when he invoked Franco’s name during Bell’s first training camp. That’s buds for you Mr. Bouchette.

During 2014 NFL Draft the Steelers surprised and shocked the world by drafting inside linebacker Ryan Shaizer in the 1st round. Then they broke protocol and immediately installed him as a starter. Shazier drew raves, even as Sean Spence’s amazing recovery drew plenty of attention.

Of course Shazier got hurt in the Steelers victory over Carolina, and Sean Spence and Vince Williams have manned inside linebacker along side Lawrence Timmons since then.

Shazier is now back to health, but he didn’t play a down vs. the Bengals, which given Spence and William’s play isn’t a surprise. But is there more to the story there?

Well, for that, look to the one man who wasn’t surprised by the Steelers decision to pick Shaizer – Jim Wexell:

Maybe my mind's getting as soft as my body from all this desk work, but Ryan Shazier is really growing on me for pick 15 #Steelers #buckILB.

The Watch Tower already patted Wexell on the back for that scoop, and now it focuses on something tucked into a column about Stephon Tuitt. Wexell’s column details the evolution of the the Steelers 2nd round pick from Notre Dame, quoting early caution from Johnny Mitchell and then he works in this little bomb:

Steelers fans didn’t want to hear that at the time, or any time when it comes to rookies. Many fans want their top draft picks thrown into the fire right away, to learn, they reason, the way Ryan Shazier learned.
Ahem.

Of course, Shazier, the first-round draft pick, is not getting any snaps these days. The grumbling around the team is that he doesn’t work hard enough, that he was given too much too soon, and now he’s paying the price on the bench.

Tuitt, on the other hand, has been forced to work for everything he’s now getting. And with Brett Keisel down, Tuitt’s getting quite a bit. [Emphasis added.]

Wexell of course don’t quote anyone about Shaizer, and keeps the focus of the rest of the article on Tuitt. But this is one of the first negative pieces of news to surface about Shazier since he was drafted. Almost all of the coverage has focused on the young man’s athleticism, his desire, and the fact that he deserved the starting spot.

In his article documenting Tomlin’s press conference leading up to the Chiefs game, Wexell suggests that “someone” could be Tomlin himself, as he revealed:

Ryan Shazier was expected to regain the starting position that was handed to him on the first day of spring drills, but sources revealed last week that Tomlin wasn’t happy about Shazier’s work ethic.

Wexell of course doesn’t provide any hint as to who those “sources” are but one can imagine that its an assistant coach, although that’s only speculation on the Watch Tower’s part.

That doesn’t mean that Steelers Nation need worry about Shazier, not yet, but it’s an important piece of information and a story what bears watching. Again, the Watch Tower gives out kudos to Jim Wexell for bringing this news to our attention.