Taken from the grade book of a teacher who is crossing his fingers after seeing his student succeed in the first two sections of a four-part pass fail final exam, here is the Pittsburgh Steelers Report Card for the victory over the Falcons.

Quarterback
Ben Roethlisberger likely didn’t keep the fantasy football owners happy, failing to throw a single touchdown pass in 35 attempts. So what did he succeed at? He protected the ball. He converted third downs. He executed the two minute drill to perfection. He led the team’s go ahead touchdown. He burned off over 7 minutes in the four quarter. He was right on the money in the game sealing pass. He did it without much of a running game to support him. Perhaps not excellent by Fantasy Football standards, but more than good enough for real football. Grade: A-

Running Back
Opponents facing the Steelers now have a choice. Do you sell out to stopping Le’Veon Bell? The Atlanta Falcons tried and limited him to 47 yards on 20 carries, or 2.5 yards per carry. By one measure, they succeeded. Unless you overlook the 44 yard catch Bell ripped off on 3rd and 2 to set up a field goal; Unless you consider him running untouched into the end zone to close the 1st half; unless you factor in him running 13 yards for the Steelers final TD. Unless you take into account Bell converting 2 third downs in short yardage. Other than that, they stopped him cold. Will Johnson again blocked well. Grade: B

Tight Ends
Heath Miller got off to a shaky start in 2014. But for several weeks he’s been back to doing what he does best – coming up with big catches for the Steelers at the right spot on the field, at the right time of the game. Miller was 4 for 68 on 5 targets, and as usual he made every one count. Matt Spaeth continued to block well. Grade: B+

Wide Receivers
It seems like each week Antonio Brown does something else to confirm his status as an elite receiver and his toe-tap to set up the 2nd half score was his latest. Martavius Bryant had 3 catches for 31 yards and almost came up with a big one in the end zone. Lance Moore had two passes thrown his way, but could not hold on to one of them and the other was out of his reach. A solid day for the wide receivers. Grade: B+

Offensive Line
The offensive line kept Ben Roethlisberger clean for most of the game, as he was only sacked once although he was hit 5 times. Michael Adams did appear to struggle a bit, getting the start over Marcus Gilbert – expect Gilbert to start next week. The line cannot be said to have had a spectacular game run blocking, but they got it do in the Red Zone twice for Bell. That plus protecting the passer counts for a lot. Grade: B-

Defensive Line
Take out Matt Ryan’s 2 runs and the Falcons had 70 yards rushing. Atlanta did run a little early in the game, but not much to be of any consequence. Cameron Heyward led the registered a QB hit, and defensed a pass. Steve McLendon was solid stopping the run. Stephon Tuitt actually led the unit in tackles. Not a bad day for the defensive line. Grade: B-

Linebackers
Jason Worilds fell victum to an inane flag for roughing the passer when he clearly was in the strike zone and did not lead with his head. Sean Spence played well, registering the team’s only tackle behind the line of scrimmage. Lawrence Timmons was all over the field, making stops when he needed to. Vince Williams, however, played the role of the heavy man, leading the unit in tackles and helping snuff out the Falcon’s final drive. Jarvis Jones was uncomfortably quiet, and Arthur Moats did nothing to extend his 15 minutes of fame. Overall solid play from the linebackers but there was not enough pressure on Ryan. Grade: C+ 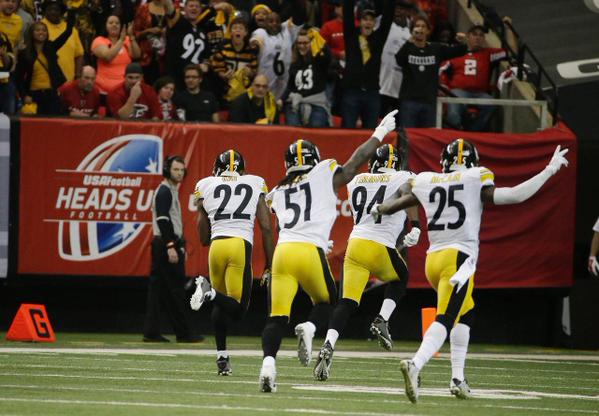 William Gay takes it to the house vs. Atlanta

Troy Polamalu has returned 3 pick sixes in his career. Now William Gay has 3 pick-sixes in one season. Antwon Blake looked good early but did get beaten in coverage on the two touchdowns. Matt Ryan’s 310 yards might make some fantasy owners happy, and he did play well during the middle stretch of the game. But his two runs came because there was no one open. Likewise, on the Falcon’s final drive, the most he could manage was a 4 yard pass because nobody was open. That means the secondary was doing its job at critical junctures. Grade: B-

Special Teams
Devin Hester did break one, but Shaun Sushiam managed to kick it away from him on most occasions, and Shamarko Thomas stoned him on another. Antonio Brown ripped off a nice return. Suisham made all of his kicks and Brad Wing downed two punts inside the 20. Grade: B

Coaching
Dick LeBeau’s defense isn’t going to cause too many offensive coordinators to lose sleep, but LeBeau’s unit managed to hold the Falcon’s to two field goals in 4 trips to the Red Zone, and forced a three and out when it needed one in the fourth quarter. Sure, more pressure and fewer 40 yard plus (2) and 1 yard plus (1) pass plays would be nice.

It’s a testament to this young man’s development and growth that teams are now specifically game planning to stop Le’Veon Bell. And the Falcons did frustrate the Steelers running game, at least at times. But the Todd Haley ensured that the Steelers offense didn’t miss a beat and as a consequence, Bell managed to find other ways to hurt the Falcons, short of just grinding down yards.

The 2014 Pittsburgh Steelers are only half way through their pass-fail season ending final exam, but Mike Tomlin has his team playing together as one and executing when it needs to thus far. Grade: A

Unsung Hero Award
There was a name missing from the wide receivers ranking, and that was on purpose. Yes, this game will be remembered as the day when the Steelers Killer Bees broke 3 franchise records. It will be remembered as the day when an exclamation point was put on “Big Play Willie Gay.” But there was another player who quietly did what was asked of him, stayed on the same page as his quarterback, caught everything throw to him, converted a key third down, and set up a touchdown with a nice long 30 yard catch. That player is Markus Wheaton and for those exploits he is the Unsung Hero of the Steelers win over the Falcons.