Like Troy Polamalu, Steelers veteran Brett Keisel isn’t a free agent in 2015, but like Polamalu he’s another aging veteran whose future with the franchise the Steelers must make a choice on. 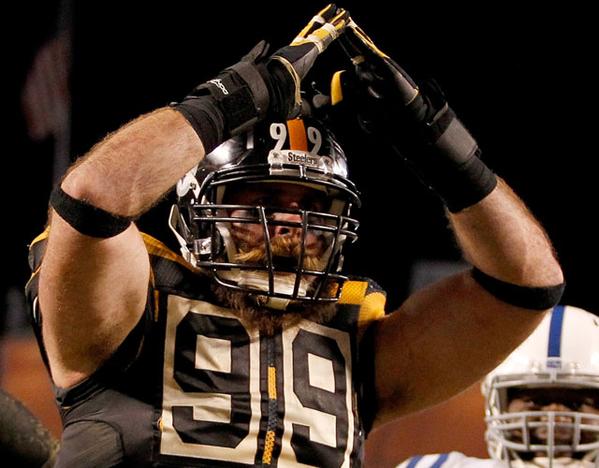 Capsule Profile of Brett Keisel with the Steelers

Sometimes you really do save the best for last. The 2002 NFL Draft was Kevin Colbert’s best in terms of value for pick. Colbert picked 8 players – 5 of whom became starters (Kendall Simmons, Antwan Randal El, Chris Hope, Larry Foote), another became a valuable back up (Verron Hayes) while another served effectively as a role player in spot duty (Lee Mays).

Brett Keisel barely played as a rookie, missed his sophomore season with a shoulder injury, began getting snaps in his third year, and worked his way into the regular rotation by 2005, which you’ll note ended with the Steelers winning Super Bowl XL.

Still, when Kimo von Oelhoffen left after 2006, Kesiel was seen as someone who could “hold his own” alongside Aaron Smith and Casey Hampton. But by 2008, another Steelers Super Bowl season, it was clear that Kesiel was a legit player in his own rite.

Kesiel arguably began playing his best ball in his mid-30’s, emerging as a clear leader of the Steelers defense during the 2010 season. Kesiel continued to play at a high level though 2013. The Steeler flirted with going without in 2014, but Kesiel returned and continued to play well.

The Case for Keeping Brett Keisel

Should Brett Keisel return to the Steelers in 2015?

From top to bottom, Brett Keisel’s situation with the Steelers remains very distinct from that of Troy Polamalu. First, Keisel’s salary cap value is negligible. Second, he continued to play at a high level on a semi-part time basis through 2014.

Arguably Keisel’s deflected- pass-turned-interception vs. the Texans provided Pittsburgh with their pivot moment for 2014.

Yes, Brett Keisel turns 37 in September. But a 37 year old Brett Keisel is probably still provides the Steelers with stark upgrade from a 28 year old Cam Thomas. In Cameron Heyward, Steve McClendon and Stephon Tuitt the Steelers have a solid front 3 with all 3 players looking at additional upside. Dan McCullers also showed a lot of potential in as a rookie.

But there’s still a place there for Brett Kesiel to provide both depth and leadership.

The Case Against Keeping Brett Keisel

While the “Old, slow and done” cliché lost its relevance regarding the Steelers defense by 2013, this is still a defense in need of rejuvenation, and you don’t rejuvenate with 37 year olds. A year ago, the Steelers had the luxury of leaving Brett Keisel hanging. It took an offer from Bruce Arians in Pittsburgh West to spur the Steelers to act.

There are a lot of solid reasons to keep Keisel, but the Steelers would be foolish to sacrifice a roster spot, let alone passing on drafting a promising young defender in order to keep Keisel. Brett Keisel has had a tremendous career in Pittsburgh.

Give Da Beard his day, and if he wants to take a victory lap in Tennessee with Dick LeBeau, more power to him. The Steelers must move on.

Predicting what the Steelers will do and what decisions Keisel will make is difficult. He’s indicating he still thinks he can play, and 2014 showed he probably can.

Yes, he’s missed time due to injury each of the in four of his past five seasons, but no one will ask or expect him to play full time.

Bringing Kesiel back in a Jerome Bettis like role makes a lot of sense and could end up paying some long-term dividends. Hopefully, Mike Tomlin, Kevin Colbert, and Keith Butler will see things similarly.

Thanks for visiting. Click here for the more of the Steelers 2015 Free Agent Focus.