The Pittsburgh Steelers have weathered two full weeks of free agency, but the biggest event from a Steelers media analysis involves one Steelers Nation scribe who doesn’t even have press credentials (yet.) The Watch Tower takes a look at that, plus an interesting nuggets on James Harrison and Jarvis Jones.

Brice McCain’s defection to the Dolphins might be the Steelers biggest on the field free agency loss this off season, but perhaps the biggest off season “free agency” move for Steelers Nation in general involves a Steelers scribe.

Two weeks ago Neal Coolong announced that he was leaving Behind the Steel Curtain after nearly 6 and a half years with the publication, with close to the last three as the site’s editor.

Before proceeding some important disclosures are in order. Yours truly is an occasional, non-paid contributor to BTSC. More over, I both know Coolong well and consider him to be a friend. In fact, it was a Watch Tower column analyzing Stanley Druckenmiller’s media savvy (when Druckenmiller was trying to buy the Steelers) which put Steel Curtain Rising on the map for Coolong.

Behind the Steel Curtain is a venture sponsored by SB Nation, which in turn is owned by VOX Media, an emerging media company. Michael Bean was BTSC’s founding editor, and even before Coolong joined in 2008, BTSC had already established itself as the top Steelers fan site on the net.

Coolong has a background in journalism, having worked for the Minnestota Star, having cut his teeth on tasks such as covering “track meets in the freezing April temperatures of the upper Midwest.” Coolong left the Star to work in the corporate sector, but still found himself longing to write which drew him to Steelers Fever.

Steelers Fever provided what the Star lacked – immediacy. But Coolong’s ambitions quickly outgrew his role at Steelers Fever – publishing just once a day wasn’t enough. Happenstance brought him in touch with the owner of Die Hard Steel and in Coolong’s words:

That’s when I got the immediacy I wanted. And no editorial oversight. It was awesome.
Suddenly, I found myself wanting to get up early so I could write before I went to work. I’d pound a few cups of coffee, write out a few stories and I’d keep my eyes glued on the site’s traffic numbers.

Unfortunately for Coolong, the Die Hard Steel network suddenly shut down in 2007 without even an explanation, let alone a final pay check, to Coolong. Undaunted, Coolong moved on to Jim Wexell’s Steel City Insider and Real Football 365.

That wouldn’t come until Coolong saw Michael Bean put out a call for writers at the end of October 2008. Coolong’s contributions began with his “Pregame Zone Blitz” and quickly morphed into multiple entries per day.

Regular BTSC writers won’t bat an eye when learning of what Coolong considers his greatest accomplishment on the site:

…is the amount of people who appear convinced I’m a beat writer. That I’m at the South Side facility, firing questions at Mike Tomlin, every day. I tell them I’m not a beat reporter, and that I have a full time job outside the site. The question is always the same: “How do you write that much?”

Indeed, anyone who has ever tried to blog, if only for a few weeks, asks the same question. Coolong’s production at BTSC was both legendary, sometimes writing as many as 9 articles per day. While Coolong’s features can stand with the best and most experienced pro football writers (see his commentary on the day the Steelers cut James Harrison), he’s become a true master at the art of “Content aggregation.”

“Content aggregation,” for those unfamiliar with the term, is the process of taking a news story published elsewhere, summarizing it and, when done right, adding your own spin, interpretation, or additional value-added observation. Content aggregation is a staple of any fan-based sports blog and this site is no exception.

Coolong explained the process of taking a 140 character tweet and “Learning to recognize the bigger story in the small details, then figuring out how to get it written (heds, lede, copy and teasers) in five or six minutes along with keeping an eye on regular work takes a slight amount of work.” Coolong learned his craft well and to his credit, and unlike some other “big name” Steelers fan sites, he did it ethically, always crediting the original source and always providing a back link.

With Coolong gone BTSC remains in good hands with new editor Jeff Hartman, someone who is already showing his own knack for content aggregation, and someone whose capble of writing strong features as well.

In his new venture, Coolong is going to be editor of USA Today’s Steelers Wire, a stand alone site dedicated to the Steelers. It is believed that USA Today will be creating similar stand alone sties for all 32 NFL teams.

In addition to his BTSC experience, Coolong will bring the same passion to “Prove it again” that has driven him out of bed at 4:15 every morning for over 3 years. The Watch Tower wishes him the best of luck.

The motto of SB Nation is “Fans passion, professional” and during the tenures of both Michael Bean and Neal Coolong the Watch Tower repeatedly praised BTSC for producing features that offered depth and insight that the professional press rarely provides.

SB Nation editors are paid for their work, and while it’s unknown how much, most of those editors have primary jobs elsewhere. The sites also pay minimal stipends to some of their regular writers.

Coolong’s has now just parlayed his work a bigger opportunity with a “mainstream” outlet, and he is not the first editor of an NFL SB Nation site to do so. What makes this so interesting from a business perspective, is that USA Today’s Steelers Wire isn’t the only mainstream media outfit that’s gearing up to greatly expand its Steelers coverage.

It will be interesting to see who sites with models similar to SB Nation adapt to the new competition.

Interesting Insight on Jarvis Jones from Wexell and Lolley

There’s also been new news regarding Jarvis Jones that carries a journalistic twist. Jarvis Jones of course has been the subject of intense discussion this off season, which is logical because when free agency began he was the only outside linebacker under contract AND because after two year’s he still represents a big ? on the Steelers depth chart.

One of the biggest arguments in favor of bringing James Harrison back both in 2014 and for 2015 was because Harrison could serve as a role model or mentor for younger players, including Jarvis Jones.

That’s news which warrants legitimate worry, but because it came in a subscription-only article it wasn’t wide spread.

But knowledge of it made reading a Dale Lolley piece all the more interesting. Just days before the Steelers resigned James Harrison, Lolley wrote that he expected Harrison back, and shared a picture of Vince Williams, Jarvis Jones, Sean Spence, and James Harrison and Ryan Shazier training together in Arizona. 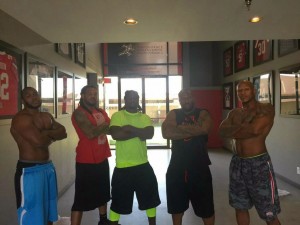 This photo certainly doesn’t contradict Wexell’s story, and one might even wonder if Wexell’s work in “outing” Jones somehow prompted the young player to seek out the veteran.

Regardless, the whole sequence of events shows how subscribing to a paid service can and does enhance the value a reader gets from information gleamed from free news sources.