With an eye towards the March 10th start of NFL Free Agency, the Pittsburgh Steelers cut Lance Moore yesterday, and as they shed one wide receiver they gained approximately another 1 million dollars in salary cap space.

Lance Moore’s departure from the Steelers has been impending since the Steelers playoff loss to the Ravens. Moore never quite fit in in Pittsburgh, he wasn’t happy with his role in the offense, and made no bones about asking for his release.

He got it to no one’s surprise. What’s interesting about Moore’s release, is what it tells us about how quickly situations, and perceptions of situations, change in the NFL.

365 days ago the Steelers were awaiting the start of free agency, just as they are today. Their depth chart at wide receiver looked like this:

Sanders departed as expected. Then a number of things followed that the Steelers management did not expect. Al Woods left for Tennessee. Woods loss was far from catastrophic, but it did show that other NFL teams who weren’t so salary cap strapped as the Steelers both could and would offer free agents just a little more than the Steelers could.

Except Cotchery didn’t resign. Rumors floated that he was wanted in Carolina. Where there was smoke, there was fire. Cotchery signed with Carolina, and the Steelers responded by signing Moore.

Some (read this site) even went as far as to invent their own sabermetrics showing that Moore would provide more bang for the buck than Cotchery. Numbers don’t lie, that analysis was sound. 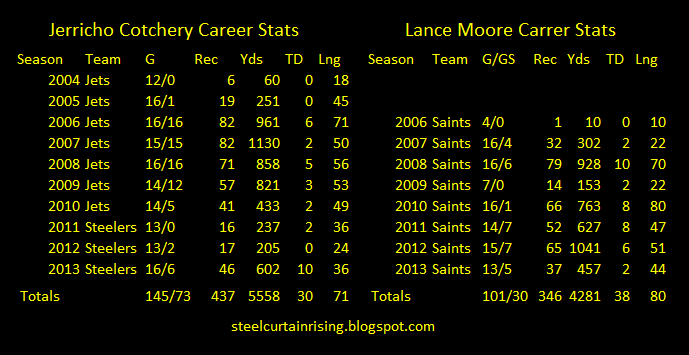 Lance Moore got injured in training camp. Word was that coaches were not impressed with his efforts in rehab and when the season opened, it was Justin Brown, the practice squad golden boy who started as the Steelers number 3 wide receiver.

Yes, Moore began working back into the line up, but he wasn’t the newcomer who announced his presence with a bang – that honor would befall Martavis Bryant, who lit up the Houston Texans on Monday night, and helped provide the spark that shifted the Steelers season.

Moral of the Story, Steelers Nation

The lesson here is that things can and do change quickly in the NFL. In December 2013, inside linebacker was the weakest spot on the Steelers depth chart.

14 months ago the Steelers situation at wide receiver seemed almost dire. Today the development of Wheaton and Bryant has made both Brown and Moore expendable.

There’s no guarantee that the Steelers can repeat these types of personnel pivots across the depth chart, but it is worth keeping mind if/when you see James Harrison decide to join Dick LeBeau in Tennessee and Jason Worilds takes big money to go somewhere else.

Thanks for visiting. Click here to for more of the Steelers 2015 Free Agent Focus.