When 2015 NFL Draft finally arrives, the Pittsburgh Steelers will enter this draft embarking on a truly new era on defensive line, with Brett Keisel’s departure having ended one that began on draft back in 1999 when they drafted Aaron Smith. Today Steel Curtain Rising focuses on the Steelers 2015 draft needs at defensive end. 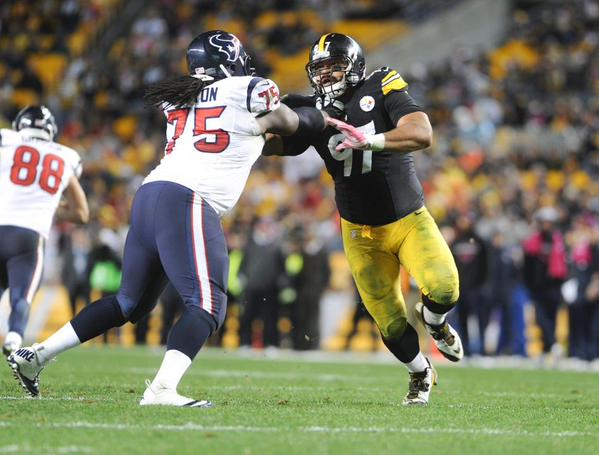 Cameron Heyward is emerging as a leader of the Steelers defense

When the Steelers drafted Cameron Heyward in the first round of the 2011 NFL Draft, General Manager Kevin Colbert hailed it as a historic day for the franchise. For a while, to some eyes at least, that claim seemed dubious, as Heyward found himself unable to move past Ziggy Hood on the depth chart throughout 2012, even has he out performed him on a snap-by-snap basis.

But Heyward did begin to start following the Steelers 0-4 start, and its no coincidence that the Steelers turned things around with Cam Heyward moved up to first string. Since then Heyward has established himself as a leader of the defense, and an all around ass kicker.

The Steelers took Stephon Tuitt in the second round of the 2014 NFL Draft, and when Brett Keisel got injured, Tuitt took over the starting role. Tuitt made some mistakes, but flashed his big play potential when he caused a fumble vs. Kansas City – with the sheer force of his hit.

When the Steelers drafted Tuitt, Steel Curtain Rising commented on the Steelers bad luck with 2nd round defensive lineman AND Notre Dame players. Tuitt still must continue to develop, but look for him to buck the trend.

Analyzing Steelers Depth at Defensive End – the Back Ups

Behind Heyward and Tuitt the Steelers have Cam Thomas, someone who struggled at defensive end all season long. Why the Steelers cut Brett Keisel and kept Thomas is a mystery, but that’s the choice they’ve made. In addition to Thomas, the Steelers April Fools day signing of Clifton Geathers gives them two experienced backups.

The Steelers also have defensive ends Matt Conrath and Ethan Hemer on their roster who will get a summer to chase their NFL dream at St. Vincents.

Priority Status of Defensive End for Steelers in 2015 NFL Draft

The Steelers carried 6 defensive lineman on their roster last year and will probably do the same in 2015, although they’ve been known to carry 5. Regardless, building quality depth at the defensive end position must be considered a priority, particularly if the 3-4 is to remain the Steelers “base” defense.

Given that, defensive end’s priority status for the Steelers in the 2015 NFL Draft should be considered Moderate-High.