The Pittsburgh Steelers have been preparing for the 2015 NFL Draft diligently. As so they should. The Steelers ability to return to the Super Bowl while Ben Roethlisberger still has years or prime play left in him will be directly tied to the decisions the Kevin Colbert and Mike Tomlin make in this draft.

And those are only the popular ones.

Steel City Insider’s Jim Wexell has waged a rearguard campaign on behalf of Owamagbe Odighizuwa, and Neal Coolong of Steelers Wire appears to be sympathetic. Nonetheless Wexell doesn’t think the Steelers are interested in Odighizuwa.

Some people will tell you that Marcus Peter’s and Randy Gregory’s talent outweighs the risks of their off checkered pasts and/or abilities to pass the NFL’s Idiot test for dru g usage.

Seriously. Yours truly lives outside the US, never had the time or rooting interest in the college game, and won’t pretend to be a draft nick. Heck, I will once again out myself as someone who emailed a friend in the states in 2004 saying the decision to pick Ben Roethlisberger was a mistake. (My friend, a Bengals fan, assured me “In a couple of years you’ll think differently.” He’s regretted being right ever since.)

So don’t look here for handicapping of prospects on the Steelers draft board. But what I can do you is tell you what the Steelers NEED out of the 2015 NFL Draft.

Over the past several weeks we’ve offered detailed profiles of the Steelers strengths and weaknesses throughout the depth chart.

As you can see, the Steelers needs fall across the spectrum of our Steelers Draft Need Scale AND yet they also cluster together too…. Ah, so if you’re Kevin Colbert, how do you break a tie?

That’s what our Steelers 2015 Draft Needs Matrix is all about.

A simple concept drives Steelers Draft Needs Matrix: Rank Steelers needs going into the draft. This is NOT an argument for drafting to fill needs – when you draft strictly for need, Troy Edwards happens (and if you’re too young to know what that means, perhaps in a year or so we’ll say the same thing about Jarvis Jones.)

Rather, the Steelers Draft Needs Matrix suggests which player should get priority should the Steelers find themselves on the clock and have a number of players graded equally. Here goes: 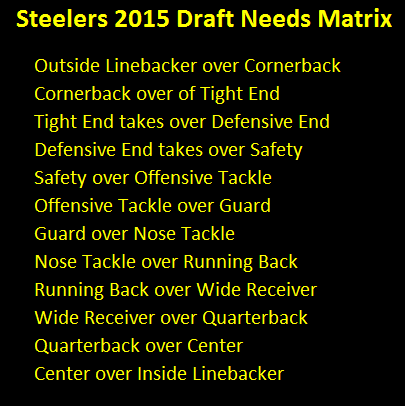 A few explanations are in order.

The Steelers have glaring needs at both cornerback and outside linebacker or “Edge Rusher” as the term is now in vogue. Outside linebacker gets the nod simply because William Gay has shown he can play, Cortez Allen has flashed that he can play better, and Antwon Blake has “upside.”

Tackle gets the nod because there’s a little less depth there, although with Ramon Foster heading into the last year of his contract, you could argue the other way. Ditto Nose Tackle edges out Running Back in terms of Steelers draft priority simply because John Mitchell can and does rotate the Steelers back up Nose Tackles at defensive end, and the Steelers need depth at defensive end.

The Steelers should lean towards filling running back over wide out because there is already more proven talent at wide out than there is in the backfield.

Finally, Quarterback edges out Center simply because Brian St. Pierre had better numbers in his second preseason than Landry Jones did, which should tell you all you need to know. Center gets the nod for the Steelers in the draft over inside linebacker because you can never have too many good offensive lineman, but the Steelers might already have too many good inside linebackers.

The NFL Draft has grown to epic proportions to the point where it is now a touring spectacle. And while perhaps it the event is overhyped, let’s not forget that for close to 250 young men, 8 of whom figure to get calls from Steelers, the draft is a day where they actually get to live the same dream that all of us had when we first touched a Nerf football and called out a fake snap count.

Steelers Nation must hope for the best – Kevin Colbert and Mike Tomlin haven’t done is well when drafting this far up as opposed to drafting in the middle.

Should they have any doubts, refer them to our Steelers 2015 Draft Needs Matrix – of course they’ll never set eyes on it, and Steelers Nation can probably be thankful for that!

Stay tuned folks. Steel Curtain Rising will have full coverage of the Steelers picks in the 2015 NFL Draft.