The 2015 NFL Draft approaches, and so it’s time to take stock of the Pittsburgh Steelers 2015 Draft needs. As always, Steel Curtain Rising will inventory the Steelers entire roster, from top to bottom with an eye towards identifying the areas where the Steelers need find the most help from the draft.

There’s a 50/50 chance the Kevin Colbert will go on the record saying that quarterback is an option for the Pittsburgh Steelers in the first round of the 2015 NFL Draft. 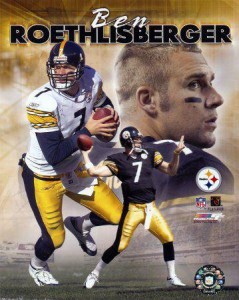 Steelers future lies in his hands

Seriously, the Steelers have just extended Ben Roethlisberger’s contract for another five years, and this franchise will not look to draft a quarterback early until Ben Roethlisberger is at least two if not three years into that deal (barring a, God forbid, serious injury.)

The franchise knows this, with Dan Rooney admitting in his self-titled autobiography that the ghost of not drafting Dan Marino hung over him while the Steelers debated their pick in 2004.

Analyzing Steelers Depth at Quarterback – the Back Ups

Behind Ben Roethlisberger, the Steelers have Bruce Gradkowski a Pittsburgh native who has logged action in 40 regular season games and boasts 20 starts.

His record as a starter is only 6-14, but that’s perhaps more of a reflection of the fact that he was quarterbacking for Tampa, Oakland, and Cleveland. And all wins are not created equally — Gradkowksi’s signature win came at the expense of the Steelers (ah, who can forget that loss to the Raiders during the ’09’s 5 game losing streak.)

At this point in his career, Gradkowksi has settled into his role as a career backup, and in many ways fits the mold of the man he replaced, Charlie Batch.

The Steelers are one of the few remaining teams that believe in and invests in putting a veteran back up behind the established starter. And while Gradkowski hasn’t seen much work in the regular season (and God willing he won’t), he came in during the Steelers playoff loss to Baltimore and the Steelers offense didn’t miss a beat.

But the same cannot be said for Landry Jones. The Steelers decision to pick Jones in the 4th round of the 2013 NFL Draft surprised some, with some commentators even arguing that the pick was intended to groom a replacement for Roethlisberger.

The bigger question is why have the Steelers kept him on the active roster. Clearly the coaches see something, but numbers don’t lie. Look back to Brian St. Pierre’s second preseason, and you’ll see that his numbers are better than those that Landry Jones put up. The Steelers recently signed Tajh Boyd, which shows that the Steelers are ready to window shop for a young arm to develop.

Priority Status of Quarterback for Steelers in 2015 NFL Draft

While an upgrade at the third quarterback slot would be welcome, given the Steelers overall roster this can hardly be considered a priority, and drafting a quarterback anywhere above round 5 would amount to a questionable use of a pick.

Don’t expect the Steelers to do so.

A new third string quarterback would be nice, and can be found in the draft, but the priority simply isn’t high. Low-moderate.