The 2015 NFL Draft is less than a week away. And while the draft is a time to take stock of a team’s present and project for the future, it also serves to put the past in perspective. 12 months ago wide receiver looked to be a glaring need for the Pittsburgh Steelers, with most commentators assuming that the Steelers would target the position in the first or second round, depending on when they took a cornerback.

Yet the Steelers waited until the 4th round to take a wide out and ended up with at season’s end being fairly deep at the position. Today Steel Curtain Rising looks at the Steelers 2015 Draft Needs at wide receiver. 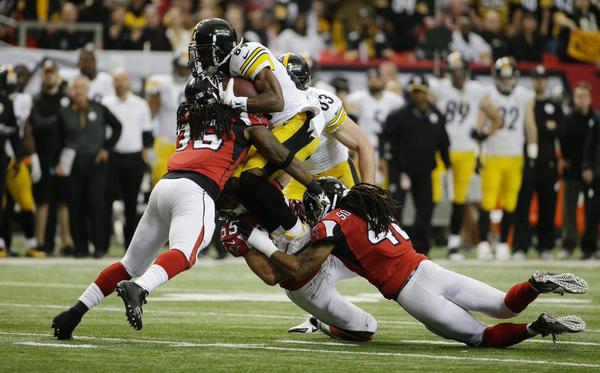 Steelers Antonio Brown simply one of the best

“He’s JJ Watt good.” Was How Pittsburgh Steelers head coach Mike Tomlin described Steelers wide receiver Antonio Brown. Three summers ago the Steelers had a choice to make, Mike Wallace or Antionio Brown. Many questioned the Steelers move to give a big contract to a player with only two years under his belt.

Antonio Brown has proven quite simply to be one of the NFL’s best wide receivers, and along side Le’Veon Bell and Ben Roethlisberger, the trio gives Pittsburgh its deepest deposits of talent at the three skill potions that it has enjoyed since the days of Franco Harris, Lynn Swann, John Stallworth, and Terry Bradshaw.

Playing along side brown is Markus Wheaton, 2013’s third round draft pick. Wheaton didn’t get the ink that his compatriots did in 2014, but he quietly made catches when it counted throughout the year, but particularly during the Steelers 4-0 close to the regular season.

Analyzing Steelers Depth at Wide Receiver – the Back Ups

But what Wheaton did in the past won’t count for much when the Steeler arrive at St. Vincents in this summer, as Martavis Bryant is expected to challenge Wheaton for a starting spot.

In addition to Bryant, the Steelers recently resigned Darrius Heyward Bey. While Heyward-Bey made the roster because of special teams in 2014, he’ll have the chance to compete for the 4th wide out position.

When it came time to sign futures contracts, the Steelers loaded up at wide out, signing Tim Benford, Brelan Chancellor, L’Damian Washington, and C.J. Goodwin. Of the quartet, Goodwin is the only one which something is known about, having sent the summer of 2014 at St. Vincents.

Priority Status of Wide Receiver for Steelers in 2015 NFL Draft

The Pittsburgh Steelers have 3 quality, starting caliber wide receivers. Dri Archer gives them a potential fourth, as does Heyward-Bey. Heath Miller does not line up wide, but he’s also a viable receiving option.

The Steelers should and probably will look to add a new face into the mix at wide out, but all of the above factors conspire to lessen the urgency of addressing the position early. While Antonio Brown’s (non) holdout does raise a yellow flag regarding his long-term future with the team, that doesn’t change the equation for the 2015 NFL Draft much.

All things considered, wide receiver’s draft priority status for the Pittsburgh Steelers in 2015 should be considered Moderate-Low.