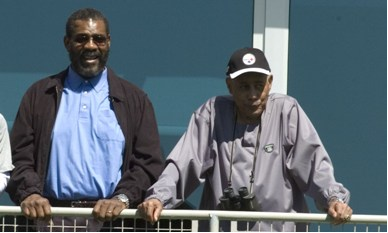 For the first time in 47 years the Pittsburgh Steelers will enter the NFL Draft without the wisdom of either Bill Nunn Jr. or Joe Greene.

None Better for Steelers than Bill Nunn

Bill Nunn is of course famous for his work for the Pittsburgh Courier, once one of the nation’s leading African American newspapers. It was in that capacity that led him to complain to Dan Rooney over what he saw as unequal treatment of black reporters by the Steelers press office.

Nunn came on board in 1968, and the next year Chuck Noll drafted Joe Greene, Jon Kolb, and L.C. Greenwood – a trio that boasts 14 Super Bowl rings between them. Nunn of course plugged the Steelers into his network of contacts at Historically Black Colleges, leading the Steelers to stars like Mel Blount, Donnie Shell, and Glen Edwards. And Nunn played a pivotal role in bringing John Stallworth to the Steelers.

Nunn officially retired in the late 80’s, but never actually stopped working for the Steelers.

In fact, whenever the Steelers broke in a new scout, the pointed him directly to Nunn for mentoring. For those tempted to think that Nunn’s title of Senior Player Personnel Assistant was merely ceremonial window dressing the way Chuck Noll’s title of “Administration Advisor” was would do well to remember that Nunn suffered a stroke while watching footage for the Steelers.

But by that point he’d already made his scouting reports and offered his evaluations. It’s impossible to know how much he’ll be missed, but any time you lose someone who had a hand in scouting 11 Hall of Famers your drafting is going to take a hit.

In contrast, the loss of Joe Greene might be easier to pinpoint, and perhaps Steelers Nation is already seeing evidence of it. Joe Greene retired a few days after the 2013 NFL Draft.

A few days after he retired, I asked a member of the Steelers press corps “Did Joe Greene actually do anything for the Steelers?”

My contact informed me that this was a question that the media themselves speculated about, but also confirmed that they’d “See Greene around all the time,” indicating he sort of acted as a “coach emeritus.”

When asked about Joe Greene contributions to the Steelers scouting efforts, Kevin Colbert revealed this:

No doubt his biggest contribution in our meeting room, aside from just the scouting, was his ability to talk to us about leadership. Many times during our draft discussions we would leave it to Joe to talk about this player’s potential as a leader. This player’s importance to his team as a leader, and none of us could speak from that vantage point, only Joe Greene could. Many times we just sat back and listened to him expound upon, what leadership meant, not only to a team, but to the Pittsburgh Steelers.

Wexell pulls no punches in his assessment of the direction of the team, observing:

I’m going to use Ike’s retirement not to lament his loss but to shed light on what needs to be drafted. And I’m not talking about cornerbacks, either. I’m talking about character….
…Polamalu told me the night he retired that he’s concerned about the “new culture” that’s replacing the players who once played for each other, not for selfish reasons.

Wexell goes on to state whatever Steelers fan knows: Players like Taylor, Polamalu, and Brett Keisel always put the team first. He contrasts that with the Steelers hosting Marcus Peters and Randy Gregory for Steelers 2015 Pre Draft Visits, pointing to red flags raised by Peter’s coachability and Gregory’s failure of the NFL Scouting Combine’s “Idiot Test” for marijuana usage (note, “Idiot Test” are my words, not Wexell’s.)

A scan down their list of visitors this draft season shows that the Steelers are looking at all kinds of oddballs, from lawbreakers to transfers to position-changers to prima donnas to academic failures and to injury issues. Is this what is meant by the new culture?

Wexell concedes (and openly hopes) the Steelers are merely doing their due diligence, giving players with questionable character issues a chance to tell their side of the story. Fair enough.

But upon reading this, one can’t help but conclude that the Steelers draft board discussion are indeed poorer for the absence of Bill Nunn and Joe Greene’s voices.