The Steelers 2015 Draft Class is now “official.” Yes, they were officially official the moment their names got called out from the podium. But now they’re really official as they’ve been assigned their first jersey numbers. 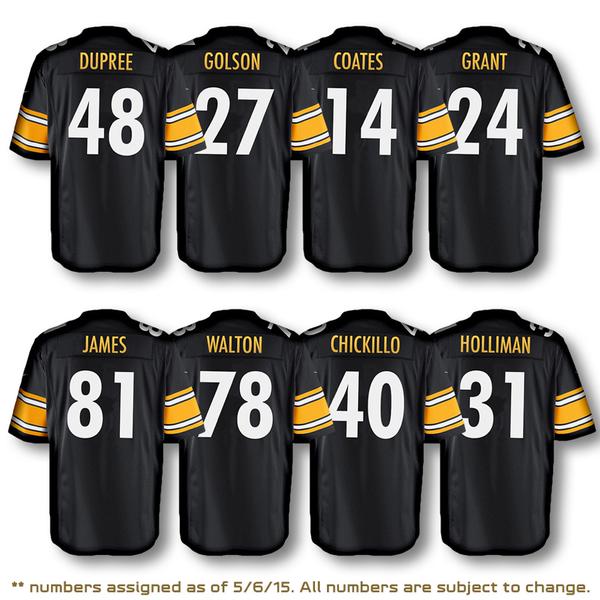 Whether these numbers were requested or assigned or some combination thereof (as we know, there’s no way Bud Dupree’s getting number 58 or 59), they’re interesting because, for the most part, the jersey numbers don’t come with any Steelers legacy attached to them.

This provides a slight contrast to 2013, when Jarvis Jones boldly requested number 95, the number worn by Steelers linebacking legend Greg Lloyd. (And Jarvis, you still deserve more time, but you haven’t earned that yet….)

1st round pick linebacker Bud Dupree is wearing number 48. 48 was last worn by Matt Crushing, and was most notably worn by David Little during the 1981 season

2nd round pick cornerback Senquez Golson is wearing number 27. Jonathan Dwyer was the last Steeler to wear number 27, and the most prominent Steeler to don number 27 was probably Glen Edwards.

3rd round pick wide receiver Sammie Coates is wearing 14, last worn by Derek Moye and most prominently worn by Lynn Chandonis back in 1951 (sorry, just too hard to pay homage to Kneel O’Dummel.)

4th round pick cornerback Doran Grant is wearing number 24, which of course was worn by recently retired Ike Taylor. During the glory days of the Super Steelers J.T. Thomas also wore number 24.

5th round pick tight end Jesse James will wear number 81. Former backup tight end David Paulson was the last Steeler to wear 81. The most prominent player to wear 81 for the Steelers was Elbie Nickel, who wore in 1948 and1949 and then again from 1951 to 1957.

6th round defensive lineman L.T. Walton will wear 78, which was last worn by Guy Whimper and 78 is the same number once worn by Steel Curtain legend Dwight White.

6th round compensatory picks linebacker Anthony Chickillo will wear number 40, last worn by Marshall McFadden . The most prominent player to wear 40 for the Steelers was Myron Bell, hard hitting safety from the Bill Cowher’s Blitzburgh teams of the mid-1990’s.

7th round pick safety Gerod Holliman last worn by Curtis Brown, but worn most prominently by Donnie Shell from 1974 to 1987.