The real Steelers 2015 off season has arrived. Since the Steelers season-ending playoff loss to Baltimore, the Steelers have weathered free agency and the retirements and releases of franchise pillars like Troy Polamalu, Ike Taylor, Brett Keisel in addition to saying goodbye to Dick LeBeau.

No NFL team intentionally weakens itself during the off season, but the salary cap and the draft force tough choices that carry opportunity costs.

The Steelers have done a lot to strengthen the roster holes were exposed at various times in 2014, but the operative questions are has Pittsburgh done enough and where are the Steelers still weak? Got idea of your own, well….

The Steelers will answer these questions themselves come July 25th at St. Vincent’s in Latrobe, but Steel Curtain Rising is giving you a chance to answer the questions now.

The Pittsburgh Steelers have made their choices. As the Steelers June Curse has shown, things could still happen that impact the roster between now and July 25th (think Willie Colon’s injury or worse yet Ben Roethlisberger’s motorcycle accident), but barring a return of Julian bad luck, the 2015 Steelers will win and lose with their current roster.

The Steelers chose part ways with Lance Moore, to let Brice McCain become a Dolphin, but made sure that Arthur Moats, Matt Spaeth, Will Allen, and James Harrison remain in the Black and Gold. They drafted 2 corners, two outside linebackers, one defensive end, a wide receiver, a tight end and a safety in 2015 draft. 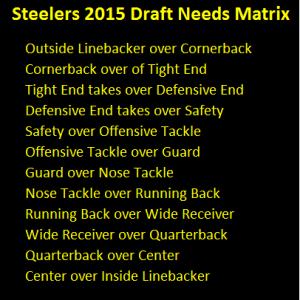 But the Steelers ignored offensive line and running back in the draft and free agency, and these were areas where lack of depth stung the team in 2013 and 2014 respectively.

And while they’ve added numbers at cornerback and outside linebacker there’s no guarantee that the Steelers can find quality in all of that quantity.

Just two years ago in 2013 the Steelers commenced training camp depth so thin that they knew they were essentially one injury away from disaster at inside linebacker or offensive line. And as fate would have it, both Maurkice Pouncey and Larry Foote were lost on opening day. In 2014 the Steelers rolled the dice that they could get through the season with Jarvis Jones, Arthur Moats, and Jason Worilds at outside linebacker and of course they were unretiring James Harrison three weeks into the season.

Other than quarterback, where Ben Roethlisberger remains indispensable, there’s no roster area depth is so precariously thin that a single injury would leave the team in dire straits. In that sense, the Steelers have given themselves a better shot at success.

But training camp is all about transforming potential into reality. Someone will fall injured, perhaps even ending his NFL dream (think Plaxico Burress rotator cuff tear in 2013.) There will be surprises and disappointments.  But for that we’ll have to wait until the Steelers start training camp on July 25th.

Until then, you have your chance to make your voice heard in our poll.