In an age when the NFL defines itself through situation substitutions, assistant coaching staffs that sometimes top two dozen, sub packages and saber metrics and fantasy football statistics, the Pittsburgh Steelers costly win over the Rams proved success on the gridiron still boils down to a few fundamental truths. Two of those are:

On the first count the Pittsburgh Steelers came out on the right side of the scrimmage battle often enough to win. On the second count, Ben Roethlisberger’s  MCL tear, even if it not season ending, reminds Steelers Nation just how fleeting contender status can be.

Something’s Not Right for Steelers in St. Louis 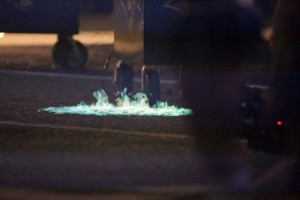 …About that turf. The game itself started thanks to a section of turf catching fire. The fire delay didn’t impact the game, but added yet bad omen to the series of caution signals leading into the game:

And so it was, that after two possessions that saw Ben Roethlisberger, Antonio Brown and Le’Veon Bell seemingly move the ball at will, the Steelers had 9 points on the board instead of a possible 16.

St. Louis Rams coach Jeff Fisher invested heavily in building his defensive line, and fields as stout of a front seven as you’ll find in the NFL. The sad truth is that after two very strong games, the Steelers offensive line found itself struggling. Numbers do not lie:

By themselves, these statistics give no reason for panic. The Steelers offensive line didn’t get “dominated” at the line of scrimmage in fact they won the critical battles both early and late in the game and that is why the Steelers won.

Nonetheless, they do serve as a potent reminder that Pittsburgh’s offensive line is far from invulnerable.

And so it was, on a day when the Steelers offense sputtered, it fell to their defense to ensure victory. Unlike a week ago vs. San Francisco, the defensive effort of the Steelers didn’t include an abundance of pretty splash plays or highlight real material. Stephon Tuitt got an early sack. Arthur Moats recorded one in the third quarter that helped force a punt.

The play of the Steelers defense wasn’t splashy or sexy. No one emulated Ryan Shazier‘s star-in-the-making breakout performance. Like its counterpart on offense, the Steelers defense didn’t dominate at the line of scrimmage, but it did win enough battles to force four punts, two turnovers on downs, and secure a crucial interception that allowed the Steelers to burn off critical clock time while tacking on 3 more insurance points.

But the NFL in 2015 is about offense in general and specifically about piling up yards on offense via the pass. It says here that if you can walk into someone elseâs stadium and limit them to six points, your defense has done itself proud. If you can do it when your offense only manages 12 points thatâs even better.

Kudos to Keith Butler. He might lack the star power that his predecessor had, but his players delivered when the Steelers needed them to.

After a seemingly ugly win like that Mike Tomlin always insists “We don’t add style points,” which translates to: At the end of the day, a win is a win. Generally speaking, Mike Tomlin’s logic is on target. But this morning feels just a little off base.

At 2:03 pm Central time, Ben Roethlisberger was a franchise quarterback having a respectable but not spectacular day and was likely headed for victory, one way or another. At 2:04 pm Central time things changed. Ben Roethlisberger went down with an injury. He was helped to the sideline. He found his way on the cart. He was out for the game. We now know he’s out for 4 to 6 weeks.

I think the hit that injured #steelers QB Ben Roethlisberger was a foul.

At this point it no longer matters.

Early word is that Ben Roethlisberger’s torn MCL will keep him out from 4 to 6 weeks as the rest of the Pittsburgh Steelers will need to face the Ravens, Chargers, Cardinals, Chiefs, Bengals, and Raiders without him.

Mike Tomlin and Kevin Colbert planned for this very contingency when they placed Bruce Gradkowski on IR and signed Michael Vick. Steelers Nation can be thankful they did.

But that doesn’t make the Steelers win over St. Louis any less costly.