Sound familiar? If this were an NFL version of Jeopardy, the questions would be:

While the specifics of their stories differ in some form or fashion, all four players were premium picks who delivered an impact as rookies for the Pittsburgh Steelers. And all four have had substance abuse stain their early careers.

As the Steelers 2015 season begins, so does Martavis Bryant’s 4 game suspension. While most fans focus how Bryant’s absence robs Ben Roethlisberger of weapons he’s desperately going to need to keep pace with Tom Brady, the long-term implications of Martavis Bryant’s self destructive spiral are more worrisome, and the stories of Tim Worley, Eric Green and Bam Morris offer him cautionary tale.

Chuck Noll once confessed that Tim Worley reminded him of Jim Brown…. The 1990 Steelers were 1-3 without Eric Green and 8-5 with him…. Bam Morris had the title “Steelers RB No. 1” handed to him….

Yet all three derailed their careers with substance abuse. 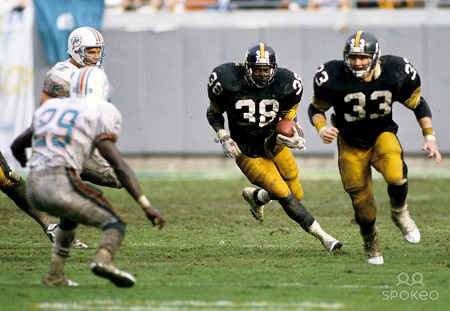 Tim Worley literally stumbled and fumbled through his first 10 games, but gained just under 500 yards in his last six and helped fuel the 1989 Steelers playoff surge. Merril Hoge earned cult-hero status for his back-to-back 100 yard playoff games vs. Houston and Denver, but Worley also ran strong in both contests.

Worley struggled in 1990, with the rest of the Steelers offense under Joe Walton, and in 1991 he tested positive for cocaine. Undaunted, rookie Bill Cowher offered to build the Steelers offense around Worley. Yet Worley, in his own words “pushed the sabotage button” by skipping a drug test to attend the NBA All Star game, costing him the 1992 season.

Worley’s problems with cocaine continued in Chicago, and by the end of 1994 he was out of football. The next Jim Brown’s career rushing total didn’t even break 1,800 yards.

Before Rob Grownkowski, There Was Supposed to be Eric Green…

The stat sheet almost suggests that substance abuse was only a blip on the radar screen for Eric Green. After all, his best NFL season was in 1993, a year after his positive test and six game suspension for cocaine. Green in fact played for seven more seasons in Pittsburgh, Miami, Baltimore and New York after his suspension.

Green never approached that level and it’s hard to imagine that drugs didn’t distract him from his potential.

Bam Morris Blows It All Away….

Bam Morris played so well as a rookie that the Bill Cowher and Tom Donahoe handed him the keys to the kingdom when they sent Barry Foster off to Carolina for a late round pick.

Yet Morris arrived at St. Vincent’s overweight and performed poorly in preseason. Once the season started, more red flags emerged as Morris arrived late to meetings, and often had trouble staying awake. Teammates noticed Morris was hanging out with the wrong crowd. Neil O’Donnell offered Morris an escape hatch, offering to let him live with him and his wife.

The Steelers cut ties with Morris, who went on to play for Baltimore, Chicago, and Kansas City, with suspensions and stints in jail in between. Like Eric Green, Morris put up respectable numbers after his substance abuse issues arose.

But like Eric Green, Bam Morris never came close to achieving his potential.

Can Martavis Bryant Escape the Path to Self Destruction?

Yes, mores and laws on marijuana are changing fast. But that doesn’t change the fact that Martavis Bryant is using a substance that the NFL bans and one that is still defined as illegal by federal and Pennsylvania law. Worse yet, Bryant failed at least 3 if not 4 drug tests.

Martavis Bryant knew he was going to be tested, yet continued to use anyway.

With any luck the two men can scare Martavis Bryant off the self-destructive path he’s currently on.