The Pittsburgh Steelers 43-18 win over the San Francisco 49ers gave Steelers Nation a lot of positives to chew on. The Steelers offense, down by two of its best players, showed it could be a dominate force. And the Steelers defense showed that it had zero intent on throwing in the towel and calling 2015 a “rebuilding year.”

Just how good was Ryan Shazier? How about 15 tackles, 3 of them for losses, a sack a forced fumble, a QB hit and a complete neutralization of Colin Kaepernick as a running threat. But there’s larger lesson that goes beyond Shazier’s statistics.

Shazier’s performance was a potentially transformative, and fully appreciating the importance of Ryan Shazier’s breakout game requires going back to words of wisdom Steel City Insider’s Jim Wexell penned a year ago.

Last October, the Steelers were 3-3, licking their wounds after a loss in which the Cleveland Browns were clearly the better team. Wexell seized upon that moment to author “Deja Vu All Over Again” in what was perhaps the best piece on the 2014 Steelers.

In Wexell’s eyes, both teams were going through the natural rebuilding growing pains that inflict even the best franchises. Wexell recounts the key decisions made by Bill Cowher and newly arrived Kevin Colbert, enumerating both the brilliant and boneheaded ones, and reminding readers that all of them were controversial at the time. (Wexell also calls out some of the more inane arguments made at the time by certain members of the Pittsburgh media).

The crux of Wexell’s argument is that chief difference between the two eras is that Mike Tomlin benefited from having Ben Roethlisberger calling his signals whereas Cowher was stuck with Kordell Stewart. Wexell’s observations made sense, and Steel Curtain Rising thought to do a detailed, position-by-position breakdown of the Steelers 1998, 1999, and 2000 rosters with their 2012, 2013, and 2014 counterparts.

Wexell concluded this piece with this observation:

Maybe one or two of these current free agents can contribute to a championship the way Von Oelhoffen did, but to tell the truth it’s all melding together in my mind at this point.
I am certain, though, that even in this state of deja vu, I have watched an organization use patience to crawl out of a hole by making one smart decision at a time. And they have no choice but to use that method once again.

The 2014 Steelers of course went 8-2 immediately after Wexell penned that article, but 8-2 seemed like a pipe dream when Pittsburgh was at 3-3. And part of the reason for the turn around, was that the Steelers were already “making one smart decision at a time.”

Today that might seem self-evident, but that was hardly the case on draft day 2014. Going into the 2014 NFL Draft everyone knew the Steelers were going to take a cornerback. The only question seemed to be whether they get a shot at Justin Gilbert, Kyle Fuller, or Calvin Pryor. Were those men absent, (and Gilbert was supposedly the one the Steelers wanted), Pittsburgh would look to wide receiver.

Steel Curtain Rising’s 2014 Steelers Draft Need Matrix had cornerback and wide receiver at its top. The Steelers 2014 draft needs at inside linebacker was rated as 7th, citing the presence of Lawrence Timmons, improved play by Vince Williams, potential by Terence Garvin, and the possibility that Sean Spence could rebound.

Seriously. Tomlin and Colbert, along with Keith Butler, Dick LeBeau and Carnell Lake clearly knew that even in April 2014 inside linebacker was far deeper than defensive back for the Steelers. They also knew they’d be without the services of Jerricho Cotchery and couldn’t have seen enough of Markus Wheaton to be comfortable at WR. 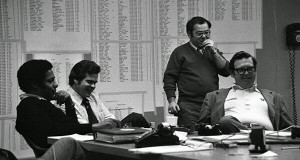 The Steelers brain trust saw a potential super star in Ryan Shaizer and did the same thing they’re Chuck Noll, Art Rooney Jr., Dick Haley, and Bill Nunn did in 40 years earlier in the Steelers 1974 Draft when they had two “good” wide receivers in Frank Lewis and Ron Shanklin. They saw the chance to grab two great ones in the form of Lynn Swann and John Stallworth.

Sure, the Steelers might be in a personnel slump with their secondary. Perhaps Pittsburgh’s playoff chances in 2015 will be limited because of it. But in just his 7th official NFL start, Shaizer showed Steelers Nation that he can be truly great.

And in picking him in the 2014 NFL Draft, the Steelers were simply “making one smart decision at a time” as Colin Kaepernick and the rest of the 49er’s offense can attest.