The suicide of former Pittsburgh Steelers linebacker Adrian Robinson caused a lot of commotion last May. And so it should. Robinson was 25 and seemingly had just renewed his lease on a pro football career, having signed a contract to play for the CFL’s Hamilton Tiger-Cats. Yet, he took his own life.

As family and friends struggled asking “Why?” Ivey DeJesus of Penn-Live asked the normal battery of questions:

He seemed to have so much: a career, friends, a loving family, a girlfriend and a baby daughter. What led him to the desperation? Was it the pursuit of perfection? Was it disappointment that his NFL career might be ending? Had his brain been ravaged by years of playing football – years of hits to the head? [Emphasis added]

The normal battery of questions, save for the last one, which today is all the more ominous, as tests on Adrian’s Robinson’s brain revealed the presence of an abnormal protein known as tau. The tau protein is similar to the proteins that build up in people who suffer from Alzheimer’s, although it builds up in different places in the brain. In other words Adrian Robinson was suffering from CTE (chronic traumatic encephalopathy.) 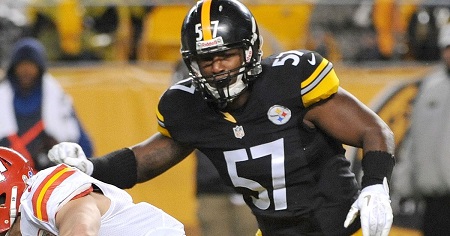 Why the Adrian Robinson CTE Diagnosis Should Deeply Disturb You

The Adrian Robinson CTE diagnosis is deeply disturbing on many, many levels.

CTE is the same brain disorder which afflicted former Pittsburgh Steelers Mike Webster, Terry Long and Justin Strzelczyk. Mike Webster died after suffering for years from the disease, and the tales of his struggles in Gary Pomerantz’s Their Life’s Work are simply harrowing. Terry Long committed suicide. Justin Strzelczyk died in a fiery crash after a lengthy highway chase.

By all accounts, “Crazed” does not even begin to describe Justin Strzelczyk’s behavior before he died led police on a 40 mile chase.

Mike Webster’s death, and Dr. Bennet Omalu post-mortem investigation on his brain, is credited for sounding the alarm bell on the dangers and risks that head trauma poses to football players.

But if Webster provided the medical community with a landmark case, his story was also somewhat exceptional. Webster played center for 17 years, and was estimated to have suffered tens of thousands of hits to the head.

While no one would suggest that there was anything “comforting” about the cases of Webster, Long, or Strzelczyk all three men were lineman who played in an age when playing with a concussion was almost a mark of pride. Their cases, along with other high profile cases such that of Dave Duerson or Andre Waters came from players who played the game for a long time.

The Adrian Robinson CTE diagnosis goes a long way to dispelling that illusion.

Adrian Robinson was only 25, and had appeared in only 22 professional football games, unlike the hundreds of games played by Webster, Duerson, Waters, Long or Strzelczyk. If you love football AND you’re concerned about protecting players from head trauma then Adrian Robinson’s CTE diagnosis MUST to make you uncomfortable.

Robinson’s CTE-influenced suicide also suggests that any number of active NFL players could be suffering from CTE at this very minute. Last year when the NFL was reeling from the Ray Rice scandal, former Steelers running back Jonathan Dwyer was arrested for domestic violence.

At the time, former Steelers linebacker Larry Foote was a teammate of Dwyer’s at Pittsburgh West aka the Arizona Cardinals and expressed shock at Dwyer’s arrest, indicating that he and his wife hat traveled with the Dwyers to an off season Christian Conference.

No one on this site will excuse Dwyer or anyone for domestic violence, but he if did experience a sudden change in character then it raises a legitimate question:

We don’t know. But the Adrian Robinson CTE diagnosis suggests that it remains a distinct possibility.

Raise your hand… if you’ve been concerned about CTE and head trauma but honestly wished the issue would “Just Go away.”

Raise your hand… if you’ve looked at players like Mike Ditka, Franco Harris and Lynn Swann, to name a few, who’ve made it into their 60’s or beyond without exhibiting any outward signs of CTE and thought, “See, those guys show the problem can’t be that bad….”

Raise your hand… if you’ve read stories about CTE and thought, “This is serious shit, but honestly, I know plenty of people who played in high school or college and are just fine as adults.”

Raise your hand… if you’ve seen the NFL rollout concussion protocols and other measures to protect the head and thought, “Good, that’s going to help a lot.”

My hand is raised to each of those questions and, if you’ve read this far, I suspect yours is too. And if you’ve gotten this point, I suspect that you’ll join me in celebrating any Steelers success vs. the Arizona Cardinals this afternoon, or whomever they’re playing next if Google should bring you to this article.

For as deeply disturbed I am at the Webster, Strzelczyk and Juinor Seau stories and the stories of others who’ve suffered from CTE, I haven’t reached my “Come to Jesus moment” yet that forces me to turn away from the sport I love.

And the Adrian Robinson suicide and subsequent CTE diagnosis suggest that roots of CTE and the forces that generate the tau protein that causes it drive far deeper and are woven far more fundamentally into the fabric of football than we’d like to believe or wish to admit.