The Pittsburgh Steelers Wild Card victory over the Cincinnati Bengals was special. Ivan Cole of Going Deep with the Steelers went as far as to compare it to the Immaculate Reception.

Sometimes those comebacks signal franchise transformation, sometimes they do not… The Immaculate Reception and the 2005 AFC Divisional playoff win over the Colts proved to be transformational; the 1989 Steelers upset of the Oilers and Tommy Maddox’s 2002 comeback vs. Cleveland were phenomenal feats, but neither was transformational.

Father time will give us the context to properly appreciate this Steelers playoff win, but there’s an important lesson Steelers Nation can learn today.

Ed Bouchette of the Pittsburgh Post Gazette did Steelers Nation a service on game day, writing a full length article detailing the Pittsburgh Steelers then 5 year playoff “slump” with the fortunes of several NFL teams.

Had the Steelers lost on Saturday it would have indeed given the franchise its first 5 year playoff drought since the Immaculate Reception, but the trust of Bouchette’s article is that this pales in comparison to what other teams have weathered.

Bouchette’s article brought to mind a recent Twitter exchange that followed the Steelers loss to Baltimore: 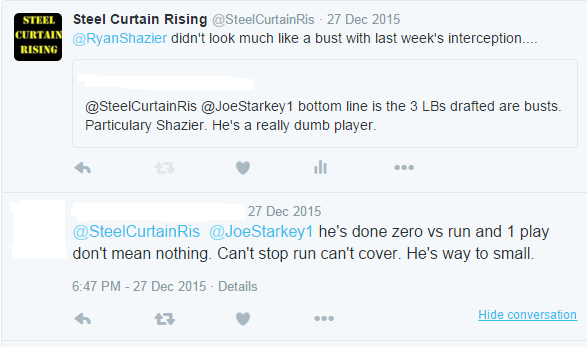 Out of respect to the other party, the person’s name and photo have been removed. But you can see the substance of the exchange itself. And two weeks later, Mr. Anonymous rant rings just a tad bit ironic, doesn’t it?

The Steelers instantly installed him as their inside starting linebacker as early as minicamp and did not look back. Shazier started the Steelers first three games, but was injured in the victory over Carolina.

Word was that Mike Tomlin was not happy with Shazier’s rehab efforts. And when Shazier returned to full health, he was forced to split time with Sean Spence and Vince Williams. Truth be told, Shaizer made a number of under the radar plays during the later half of 2014, but it appeared that Mike Tomlin wanted to send the rookie a lesson.

Still, Shazier’s status entering 2015 was never in doubt. Just how dominating was Shazier’s breakout game against the 49ers? It almost seemed as if he could have taken on the entire 49ers offense himself. But injuries hit Shazier again in 2015, causing him to miss 4 games. This prompted Steelers defensive coordinator Keith Butler to publically remind Ryan Shazier “If you are waiting to feel good before you play, you are never going to play.”

But when Shazier’s been on the field, he’s been effective. Perhaps not a superstar, but his game-clinching interception vs. Denver was, in the words of Mike Tomlin, the kind of play the Steelers drafted him to make.

Did Ryan Shazier play poorly vs. the Baltimore Ravens? Yes and find me  a Pittsburgh Steeler not named DeAngelo Williams who didn’t. But is that any reason to give up on a player who has yet to complete his second season as starter? No, it is not.

It takes time for most athletes, even incredibly talented ones, to develop into quality NFL Players.

Of course Steelers fans can readily rattle off names like Ben Roethlisberger, Rod Woodson and Joe Greene, but these men are exceptions, not the rule.

Troy Polamalu sat on the bench for a year. Lynn Swann caught just 11 passes as a rookie. And it was only in 1975, with one Super Bowl in hand, that Terry Bradshaw authored in a season where he threw more touchdowns than interceptions.

Even before forcing Jeremy Hill’s fumble, Shazier had played a solid game by any measure. But what Shazier at very end was on the same plane as what Franco Harris did in 1972, Rod Woodson did in 1989 or Troy Polamalu did in 2008. There’s a word for players like that: Special.

Sometimes the special ones take time to grow into their own. So have patience Steelers Nation and remember that Hall of Fame careers are authored on the field and not in the draft room.

4 thoughts on “Lesson from Steelers Playoff Win Over Cincinnati? Have Patience with Players Like Ryan Shazier”