While it might not evoke cheers of “Here We Go Steelers Here We Go!” the way it did for Jerome Bettis last summer, the Pro Football Hall of Fame 2016 class has been announced and this year’s class as a Black and Gold tinge.

In the spring of 1993 NFL teams literally tripped over themselves to land free agents such as Reggie White. Ticker tape parades were thrown, keys to cities were bestowed, and there was much pomp and circumstance. The Steelers took a low key approach, and one of the signings they made was that of Kevin Greene.

By the time the Steelers signed Greene, he was over 30 years old and had amassed 72.5 sacks. Yet he was little known outside of the NFC West, where he’d played for 8 years for the Los Angeles Rams. That changed in a hurry, as Bill Cowher pared him with Greg Lloyd, and together the tandem terrorized opposing quarterbacks for the next three seasons.

During that time Kevin Greene amassed 35.5 sacks, but the Steelers opted to let him depart via free agency, thinking his best days were behind him. That conclusion was very, very wrong, as Greene would go on to play for 4 more years and register another 52 sacks in the process.

As it was, Greg Lloyd’s next two seasons would be shortened by injury, the Steelers would lose Chad Brown in another year, Jason Gildon would show he was good but not great, and Carlos Emmons provided average play until the Steelers could draft and develop Joey Porter.

Dungy’s Roots Trace Back to Pittsburgh

The Steelers drafted Tony Dungy in 1977, and he played as a back up defensive back. His most notable feats were subbing as emergency quarterback as a rookie in 1977 when Terry Bradshaw and Mike Kruczek both got hurt. Dungy’s performance was a disaster, but he did complete passes to both Lynn Swann and John Stallworth. Dungy also become one of the few modern era players to both record and throw and interception in the same game.

[Editors note, the orginal version of this article had an error, which has been redacted and corrected below.]

Despite that, the Steelers traded Dungy after the 1978 season, and he played another year in San Francisco. 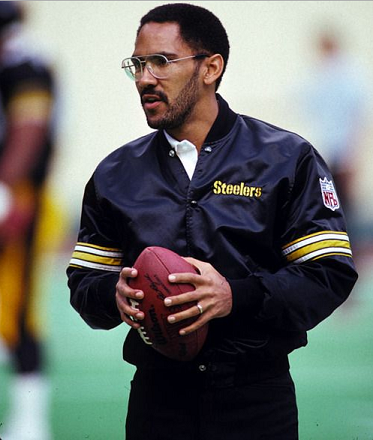 Dungy’s first two years as defensive coordinator were so successful that he was touted as possibly being the NFL’s first African American head coach. The Steelers defense declined in 1986 and 1987, as the full impact of the Steelers mediocre drafting of the early and mid 1980’s was felt. Nonetheless, in 1987 the Steelers defensive touchodowns, and were 5th in take aways.

Indeed, the 1988 Steelers finished 5-11, but saw 4th quarter leads evaporate in at least 3 games. Dan Rooney decided to order changes, and in the ensuring scuffle, Tony Dungy opted to resign rather than accept demotion.

Dungy of course, never did succeed Chuck Noll as many once expected him to, but he did go on to become the head coach of the Tampa Bay Buccaneers, where he hired and mentored Mike Tomlin has his defensive backs coach.

Tony Dungy rightly wins Hall of Fame induction for his work as Tampa Bay Buccaneers head coach and for becoming the first African American to win a Super Bowl with the Indianapolis Colts, but he made important contributions while a member of the Pittsburgh Steelers and, in many ways, his influence lives on in the organization.

The Hall of Fame candidate with the strongest ties to the Pittsburgh Steelers organization will have to wait another year. Former Steelers, Jets and Cardinals guard Alan Faneca was a candidate for induction into the Hall of Fame, but did not receive the necessary votes.