Make no mistake about it Steelers Nation: Tony Dungy is making a statement by asking Donnie Shell to induct him into the Pro Football Hall of Fame.

Election to the Pro Football Hall of Fame is the highest individual honor a football player can attain. To date, only 303 players, coaches, or builders have secured induction into Canton. The site Pro Football Reference lists 3,860 defensive backs alone, highlighting just how elite the men wearing the gold blazers are.

The choice of a Hall of Famer presenter is a highly personal one. Hall of Famers sometimes disappoint when they fail to choose a teammate or coach and instead tap a family member, college or high school coach or even a life-long friend. But this choice belongs to the Hall of Famer, and he has the right to ask whomever he wishes.

Dan Rooney asked Joe Greene to present him to confirm unequivocally that Greene’s arrival in Pittsburgh shifted the Steelers fortunes. In contrast, Steelers Nation took Terry Bradshaw’s choice of Verne Lunquist as his presenter as a slap in the face and a snub of Chuck Noll, Dan Rooney and the rest the Super Steelers.

John Stallworth chose his son, which must rank as one of the all-time father and son honors. Mike Webster gave Terry Bradshaw his final chance to put his hand under his butt. Franco Harris chose Lynn Swann to boost his Hall of Fame chances, and Lynn Swann returned the favor for Stallworth.

And so it is with Tony Dungy and Donnie Shell.

Tony Dungy’s play for the Pittsburgh Steelers as a defensive back and later contributions as defensive coordinator did not earn him his spot in Canton. He’s getting elected for his accomplishments as Tampa Bay Buccaneers and Indianapolis Colts head coach and for being the first African American head coach to win a Super Bowl.

But Dungy’s decision to name Donnie Shell as his Hall of Famer presenter represents an implicit acknowledgement of his roots with the Pittsburgh Steelers. Tony Dungy and Donnie Shell forged their relationship on the fields of St. Vincents Latrobe. 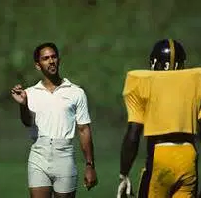 Dungy made the Steelers final roster as a after his rookie training camp, and recorded 3 interceptions and even pulled double duty as an emergency quarterback in a road game against the Houston Oilers. According to Gary Pomerantz’s Their Life’s Work, Dungy missed several weeks of training camp during his sophomore season because of mononucleosis and feared he’d get cut because of it. Shell, his roommate and mentor challenged him to put his faith ahead of football.

Donnie Shell, along with Greene, Franco Harris traveled to Tampa to comfort Dungy when his 18 year old son James tragically took his own life in 2005. As Pomerantz notes, Shell felt like he and Dungy were still teammates.

And now Dungy is doing his part to boost the Hall of Fame chances of his teammate.

Of all of the greats from the Steel Curtain defense, Donnie Shell might be the most overlooked and most forgotten. He shouldn’t be.

Shell joined the Steelers as an undrafted rookie free agent in summer of 1974 along with the Steelers legendary 1974 Draft Class. Shell found himself behind Pro Bowler Glen Edwards, but the Steelers traded Edwards, in part, to get Shell into the line up.

Stats compiled by the Dallas Morning News’s  Rick Gosselin show how wise of a decision that was. Between 1974 and 1987, Donnie Shell played in 201 games and started 162. During those games Shell:

Shell’s 51 interceptions tie him for 32nd on the all time interceptions list, and if that sounds pedestrian, over a dozen Hall of Famer’s on Pro Football Reference’s list of interception leaders have less (although to be fair, not all of those are defensive backs.) As Dungy himself told Gosselin:

Donnie played in the box and was like another linebacker as a run defender. He was probably the most physical player on a physical defense and also had 51 interceptions. He covered Hall-of-Fame tight ends like Ozzie Newsome man-to-man and covered wide receivers in the nickel package. He patrolled the deep zones. He could do it all.

Yes, Donnie Shell could do it all that’s a Troy Polamaluesque resume. Make no mistake about it, by asking Donnie Shell to induct him into the Pro Football Hall of Fame, Tony Dungy is giving his former teammate and lifelong friend a platform that highlight’s Shell’s own Hall of Fame credentials.