NFL owners meetings bring big news to Steelers Nation simply because they’re the only off season moment when Mike Tomlin talks to the press. At a recent meeting in Boca Raton, Tomlin offered unqualified praise for cornerback Senquez Golson:

We are excited about getting Senquez Golson back in the mix. I think oftentimes he is forgotten about. We were excited about him a year ago when we drafted him. I still share that same level of excitement. I can’t wait to get him on the grass.

Mike Tomlin’s embrace of Senquez Golson is both revealing and alarming. The 2015 Steelers weak spot was cornerback and it remains so a month into free agency with Antwon Blake and Brandon Boykin departing.

However, last spring plays like the one below prompted the Pittsburgh Steelers to pick Senquez Golson with their 2nd round pick in the 2015 NFL Draft.

The athleticism, tracking ability and discipline Golson reveals in the play would leave any coach licking his chops. But Golson unfortunately course injured his shoulder in Steelers OTA’s last year, sat out training camp on the PUP list, and lost his rookie season to shoulder surgery.

Starting your career on injured reserve is hardly ideal, but several Seelers have bounced such setbacks. 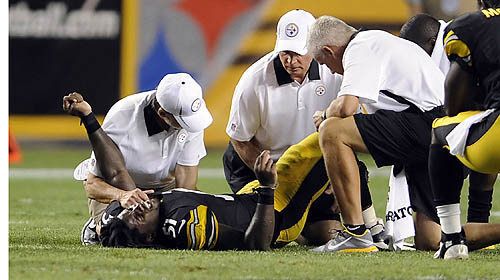 Sean Spence is injured during the 2012 preseason

Sean Spence lost his first two years to injury, yet Spence was starting for the injured Ryan Shazier by week 4 of 2014. Keenan Lewis suited up for a handful of games in 2009, but his rookie season was marred by injury. Lewis didn’t do much in 2010 either. He flashed little in 2011, and by 2012 he’d improved so much he became the guy the Steelers couldn’t afford to keep.

A torn ACL cost the legendary Greg Lloyd his rookie season, and another knee injury cost him the first half of his second season. Yet by the end of 1988, Lloyd was pushing for starting time, and going into 1989 NFL Draft, Greg Lloyd had made the reigning single season sack leader Mike Merriweather expendable.

Mike Tomlin’s faith in Golson is hardly unprecedented. However, placing too much hope in a rookie’s ability to bounce back from injury is generally a mistake, and the case of Kris Farris reveals why.

Worse yet, Bill Cowher and Tom Donahoe had swung and missed badly in attempting to replace them by drafting Jamain Stephens, Paul Wiggins and Chris Conrad.

The Steelers got that chance in the third round of the 1999 NFL Draft, taking the Outland Trophy winner Kris Farris the middle of their trio of 3rd round picks that year.

But during rookie workouts Farris’ foot began to get sore. At first he’d be OK after a few minutes, but each day it took longer to feel normal. Farris aggravated the injury on Memorial Day, sat out veteran mini-camp, and took it easy, hoping the rest would ready him for St. Vincents.

Kris Farris, not wanting to beg off of Bill Cowher’s annual run test, told the Steelers he was 90 to 95%. Farris gave it his all, but when it was all over a concerned Kordell Stewart and Jerome Bettis approached him because he looked so pale.

Subsequent MRI’s reveal cracks and then a full hairline fracture in his foot. The Steelers put Kris Farris on season-ending injured reserve, and hoped for the best.

During the 1999 season, the Steelers offensive line’s decline accelerated as as coaches alternated between Anthony Brown and Chris Conrad to see who would was “less worse.” In bars throughout Steelers Nation, fans shook their heads asking, “If only we had Kris Farris…..”

Kris Farris returned to St. Vincents with the Steelers in the summer of 2000, but earned reputation for “being soft” and Steelers cut Farris  trimmed their roster to 70.

The Bengals picked him up, but he was unable hold a roster spot in Cincinnati. Tom Donahoe brought Farris to Buffalo in 2001, did manage to play 3 games in 2001 but, in an cruelly ironic moment, Farris broke his leg in a 20-3 loss to the Steelers. Sadly, Farris never played football again.

Despite that disappointment, the 2000 Steelers were far stronger at right tackle with rookie Marvel Smith, 1999’s third stringer Shar Pourdanesh and Larry Tharpe been out of football in 1999, but whom Kevin Colbert knew from his Detroit days.

But Kris Farris’ story also should serve as a caution against the Steelers pinning too many of their hopes for improving at cornerback on Senquez Golsen.